Ghanzi beef farmers have once again made an impassioned appeal to have the Botswana Meet Commission (BMC)’s stranglehold on the local beef industry broken. Making their case at the National Business Conference in Francistown recently, the farmers presented a paper titled The case of a Ghanzi farmer; now and the future “The status of the beef industry in Botswana, what needs to be done” to captains of industry from all sectors. “It is quite clear to most farmers that the monopoly has been failing them for nearly ten years now and the camel’s back has been broken, because the communities are getting poorer, the ecology is depleted and social problems have arisen. How much longer will this situation continue before sanity prevails and the beef industry is liberalised?” reads the position paper from the farmers.
“The Beef Industry has been contributing less and less to the GDP of Botswana (approx 5 percentage in 2006 and now less than 2 percent) over the past nine years, showing clearly that there is no growth and development in that Sector of the Economy!” it added.The farmers say the BMC monopoly is also blocking Foreign Direct Investment and Private Sector investment in the Beef Industry, and this they say fails the country’s economic diversification.
“In the past four years we have driven away investors who were prepared to invest millions in the development of a “State of the Art” export abattoir in the Western Region of Botswana, to export value added meat products via Walvis Bay in Namibia…Does the protection of a failed monopolistic environment, warrant the loss of such a massive foreign investment to grow and develop the beef industry?” the farmers further ask.
They posit that Botswana’s monopolistic reliance on weaner production to provide animals for desirable throughputs is flawed. “Rangeland producers are moving away from weaner production, retaining them to grow out and reducing cow numbers to make place for them. National herd numbers will reduce,” they argue, adding that “The average price of a group of weaners in Ghanzi, weaned from Rangeland, in the 50 percent male and female ratio, is in the vicinity of P10.00 /kg whilst cost of production is in the vicinity of P15.00 per kg. It is simply not viable.” The farmers say weaner prices have remained non viable and stagnant for “15 years to be precise” and that “the sole exporter pays around 60 percent of what they earn in the EU market, this is against the globally accepted norms of 85 percent.”
BMC CEO Dr Akolang Tombale told the Parliamentary Committee of Statutory Bodies and Enterprises last week that they have, as BMC, taken a new resolution after rebuffing the idea on dissolving the Commission.  In his previous position, Tombale refused to accept that BMC was a monopoly, saying it is a single channel for sales which bring efficiencies for the marketing of beef to the lucrative European Union, a niche market that would otherwise not be enjoyed by any single farmer as there are prohibitive costs such as freight and insurance. Tombale argued before parliament that the BMC monopoly was not the reason the BMC was in financial crisis.
FARMERS STATE THEIR CASE
The farmers argue that BMC can only cope with less than 10 percent off take per annum and “In a drought year off take should be greater than this.” This is a semi-arid production environment prone to droughts so, cattle need to be slaughtered before they die in times of droughts. BMC therefore cannot fulfil its mandate to take on these cattle.”By not slaughtering the potential off-take referred to, the 500 000 cattle get thin, possibly die, or at minimum degrade the ecology and the increased P2.5billion is lost to the economy. As their parting shot, the farmers state that: “Beef producers have the capacity to be successful without a monopoly, at a lower cost to government and improved incomes to themselves.” 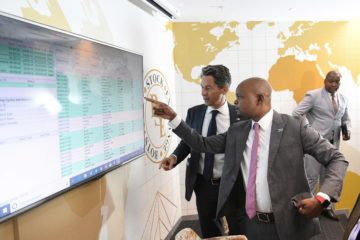