Botswana Public Officers Pension Fund (BPOPF) is rumoured to have closed a deal to acquire a larger interest in Wilderness Safaris, with 20.4 million shares bought on the Johannesburg Stock Exchange (JSE).
“Wilderness, like Mascom is a cash cow for the 150 000 members of BPOPF,” a source says.“BPOPF already owns 8 percent of the listed shares, it is another 8 percent of the unlisted shares owned by BPOPF, together with Puma and ‘the friendly faction’ that will make it a Botswana owned company,” revealed the source, adding that “as it is, the company is just in the hands of foreigners,” the source said.
At the heart of the faction’s motivation, apparently, is the highly lucrative Mombo Concession which charges as much as P40 000 per night for patrons in the peak season.
Sources have previously asserted that the Botswana Stock Exchange listed company is split into two prominent factions that are both concerned about who will have ultimate control of the company. 34.6% of Wilderness Safaris is owned by The Tollmans through Wine Investments, which makes the largest share holders. They are followed by international sporting brand, Puma SE, which holds 25.1% of the stake. If the Tollmans were to combine their stake with Puma, they would command a 60% majority shareholding with Puma; Puma SE and the Tollmans are central to how the question of who controls the company will be settled in the end.
Insiders say that following the 2013 exposé by the local media which revealed the Tollmans’ rough scuffle with the US Internal Revenue Service (IRS) over their offshore tax evasion scandals, and the US$ 100 million settlement they ended up paying over the matter; other shareholders put it to the Tollmans that with this reputation, it was bad for business to have them as the face of the company.
Ultimately, whatever happens with internal shareholding issues at Wilderness Safaris, both parties will have to avert the possibility of Mombo Concession being re-tendered by government, something which sources who spoke to Gazette Business say is a real possibility and an issue of concern to all parties within the company. Mombo is a prime camp location for Wilderness Safaris: it is their flagship location. It lies atop the Chiefs Island which has an embarrassment of wild animals, and is counted among the very best in the entire delta.
“Without Mombo, their entire business proposition in Botswana will become shaky because it is by far margins the most profitable in the group,” an industry expert said with authority.
“If Mombo does come up for tender, it will be hotly contested. A hotly contested site will attract a hefty lease fee, so for this reason Wilderness Safari is evidently anxious to avoid a re-tender process and duck under the radar screen for two reasons: to be sure of re-securing it, and to contain a possible massive lease fee hike which might be caused by other companies putting up competitive bids,” the source argued.
It is not clear how the re-tendering of Mombo would be averted, if such an interest exists, but the Botswana Tourism Organization is from time to time advised by the Collins Newman and Co law firm on questions of tourism concessions tendering. It is also not clear to what extent Parks Tafa who is both Managing Partner at the law firm and Board Chair at Wilderness can help resolve such an impasse. It is often taken for granted that because he is also President Khama’s personal lawyer and an influential member in the BDP, Tafa’s influence can swing things one way or the other. Sources say that bringing BPOPF will guarantee Mombo Concession to Wilderness, avoiding the possibility it being re-tendered.
Gazette Business also understands that the Tollmans have access to President Khama, and could be able to make their case, should they want to have a say in how to avoid the re-tendering of Mombo.
Attempts to get clarity on what this development means for Wilderness Safaris were futile as Parks Tafa and Keith Vincent were not reachable on their mobile and office line respectively. 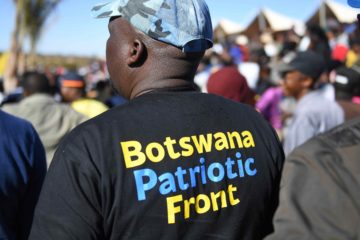