Sovereign Credit Ratings Agency, Moody’s, has warned that COVID-19 will trigger a recession in Africa that will have long-lasting negative economic and social consequences across the continent. For Botswana, the report sees weakened global growth impacting demand for diamonds, with production cuts to support prices resulting in a significant slowdown in the country’s diamond sector. Staff Writer KEABETSWE NEWEL reports

The agency published a research document last week authored by Dalrymple which cautions that the longer-lasting negative effects on the region’s credit profiles will leave them with diminished capacity to absorb future shocks. He says while growth will resume later this year in concert with the rest of the world, recovery will be slow and there is a risk of longer-term scarring from the crisis. “Pressures on already weak fiscal positions will intensify,” he says. “The fall in revenue from the economic slowdown, spending on measures to support the economy, and a rise in healthcare spending will widen fiscal deficits sharply and increase borrowing requirements.”

Further, Moody’s Vice President says oil-exporting economies like Angola (B3 RUR-), Nigeria (B2 negative), Gabon (Caa1 positive) and Republic of the Congo (Caa2 stable) have already seen a fall in revenue that will further aggravate their already weak fiscal metrics and lower the resources available to repay debt. Dalrymple warns that immediate credit risks are elevated for those facing financing and external stress. Although international support like the G20 Debt Service Suspension Initiative (DSSI) will provide modest liquidity relief for a number of countries, he stresses that those sovereigns with large borrowing requirements or weak revenue bases like Mozambique (Caa2 stable), Zambia (Ca stable) and Ghana (B3 negative) face the most severe liquidity stress.

At the same time, he reveals that the falls in foreign exchange reserves, foreign direct investment and remittances have elevated external risks for those countries with low reserves like Ghana, Tunisia (B2 RUR-) and Zambia. Long-lasting consequences of the COVID-19 shock threaten governments’ capacity to reverse the increase in debt burdens. Assuming that growth returns and that this year’s wider deficits can be reined in subsequent years, most African governments’ debt burdens will stabilize after a material rise this year. However, Dalrymple says few governments have a track record of reversing debt increases. According to him, if fiscal strength is not restored, sovereigns will be left with heightened vulnerability to a shift in private creditors’ sentiment and weaker capacity to absorb future shocks.

“We have significantly reduced our growth forecasts for the African sovereigns that we rate in response to the COVID-19 crisis,” the Moody’s Vice President notes. “Botswana (A2 negative), Namibia (Ba2 negative), South Africa (Ba1 negative) and Mauritius (Baa1 negative) face the sharpest declines in real GDP growth because the impact of domestic restrictions on economic activity and the impact of a fall in global demand on key sectors such as tourism and mining. Senegal (Ba3 RUR-), Mozambique, Ethiopia (B2 RUR-) and Uganda (B2 stable) will also see slowdowns but will still experience growth, given their more limited exposure to sectors more vulnerable to falls in global demand.”

For almost all African countries, Dalrymple says the border closures and broader lockdown measures have significantly slowed small-scale trade across the continent, which is a crucial source of income and employment. With 86 percent of the population employed informally, the scope for government intervention to protect jobs and incomes is limited. He says the fall in commodity prices and international demand is exacerbating the impact for oil producers like Angola, Nigeria, Gabon, and the DRC and for copper exporters like Zambia and the DRC (Caa1 stable). Similarly, he adds, weak global growth is weakening demand for diamonds, with production cuts to support prices resulting in a significant slowdown in Botswana’s diamond sector.
“A decline in international demand will also weigh on Namibia’s mining-dependent economy,” Dalrymple notes. “By contrast, the impact on soft commodities like cocoa is likely to be limited, which will insulate economies like Ghana and Côte d’Ivoire (Ba3 RUR-). Meanwhile, export of gold, of which Ghana, South Africa and Tanzania (B1 negative) are the primary exporters, attracts prices that are typically inversely correlated to pro-cyclical commodities like copper.”

COVID-19 has also worsened problems for major agricultural producers like Kenya (B2 negative), Ethiopia and Uganda who already face the threat of large locust numbers, especially as border closures are likely to slow delivery of pesticides from the Food and Agriculture Organization of the United Nations that can kill the insect, according to Moody’s. Dalrymple says the crisis and its economic effects are also increasing social risks. Aside from the impact on health outcomes, COVID-19 is likely to lead to further increases in already high unemployment, in particular among the youth. If sustained, he warns, this could heighten social tensions. The shock will also stall any improvement in low incomes, aggravating income inequality.

Sharply slower growth and wider deficits will raise debt-to-GDP ratios across Sub-Saharan Africa this year. Assuming that growth returns and that wider deficits can be reined in in subsequent years, Moody’s expects the debt burdens to stabilize at higher levels in the next few years.

However, the capacity of governments to manage their debt has diminished over the past decade, according to Dalrymple .
“A renewed shock to revenue and the potential long-lasting economic and social implications of this crisis increase the risk that governments are unable to reverse the jump in debt burdens,” he says. “Although some have broadly stabilized their debt burdens in recent years, none have established a track record of being able to reduce them materially. If fiscal strength is not restored, sovereigns will become even more vulnerable to shifts in private creditors’ sentiment and their capacity to absorb future shock will weaken.”

He notes that lingering risk aversion could also put more pressure on currencies across Africa than they currently assume. This, he says, would raise the debt burdens of sovereigns with high levels of foreign-currency debt like Mozambique, Angola, Rwanda and the DRC. According to Dalrymple, the weaknesses in Zambia’s credit profile have left the country extremely vulnerable to acute risk aversion and a prolonged period of low commodity prices as a result of the global economic impact of COVID-19, increasing the likelihood of a sovereign debt restructuring to address debt-sustainability issues. 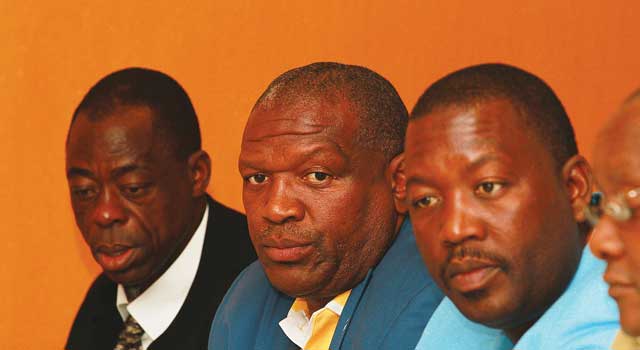