Botswana has taken delivery of 14 Bat Hawk light surveillance aircraft, which will be deployed in air-borne anti-poaching patrols to protect elephants and other endangered animal species in four major game reserves in the central and northern parts of the country.
According to reports, pilots and technicians concluded a training course on 17 June. The Botswana Defence Force’s Brigadier Benjamin Masunga said personnel from the Defence Force, Botswana Police Service  and  Department of  Wildlife  and National Parks were trained to fly the aircrafts, with the pilots having accumulated 50 hours by the completion of the course.
Addressing the aviators, Masunga said by training them and purchasing the new aircraft, the government of Botswana wants to send a clear message that it remains committed to the fight against poaching in order to protect elephants, rhinos and other critically endangered animal species.
He said by vigorously fighting poaching, the government wants to ensure that the country retains its status as one of the world’s top safari and tourism destinations. Among the graduates were ten pilots and technicians from the army and police services. The first Bat Hawks were delivered in April this year, with final deliveries earlier this month.
Masunga said the Botswana Defence Force is responsible for patrolling the eastern and northern parts of the country that include Chobe and Ngami, the police is responsible for the Central Kalahari Game Reserve while the Wildlife and National Parks department patrols the Kalahari Trans frontier and the Mabuasehube Game Reserve.
Botswana Police Service deputy divisional commander, Assistant Commissioner Seabe Maboka, said the aircraft will not only fight poaching, but will also assist in curbing cross border crime.
Built by Micro Aviation of Nelspruit in South Africa, the Bat Hawk is a light sport aircraft which features a strut-braced high-wing, a two-seats-in-side-by-side configuration open cockpit, fixed tri-cycle landing gear and a single engine set in tractor configuration.
According to the manufacturers, the light aircraft, which weighs 540kg, is built for operations in rugged conditions and powered by a Camit six-cylinder 125 hp engine. Due to its slow forward cruising speed as well as its quiet operation, it is well suited for aerial surveillance over game reserves.
Some of its roles include reconnaissance and surveillance, carcass location, fence checks, aerial photography, surveys, water-point and rare species monitoring and scientific and research data collection.

Ofentse goes for a win in the marriage business 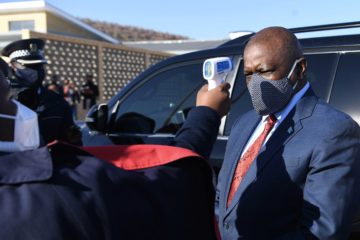