Minister Olopeng: Stay off Facebook and lead our sports revolution!

What is clear with the just ended Olympics in Brazil is that we are a country in need of a bold new strategy when it comes to sport, especially Olympics. While some people are quick to hide behind an over stated spirit of patriotism, there has never been a time to openly acknowledge our limitations in track and field sporting activities than now and to ask ourselves what we can do to become formidable. While we agree there is hope for Karabo Sibanda, Isaac Makwala and the controversial Nigel Amos among others, we have seen problems ranging from the technical- to what many people agree is a clear under representation, as we did not have representatives in many other sporting codes.
The last time Botswana had a formidable representative in a sporting code besides athletics was in the 2009 Beijing Olympics (Gable Garenamotse). Since then we have, under unclear circumstances, failed to send a respectable, varied entourage to the games. While some may typically leap to the “resources” dodge, we have to, on the eve of our 50th independence ask ourselves what we need to do to grow and build competitive alternative sporting codes like canoe rowing, archery, short putt, long distance running, walking and others that have lead to many people believing that many Batswana could do well in. The person who should lead and inspire this debate however is Youth and Sport Minister Thapelo Olopeng. The problem with Olopeng, for all his well meant patriotic and sometimes nationalistic fervour is that he spends too much time on Facebook, trading insults with every Jack and Jill, instead worrying about big issues. Proper statesmen should never find themselves getting down low and dirty with ordinary citizens; on social media. We ask the minister to positively reflect on the just ended Olympics and lead the conversation on what must be done to turn our fortunes around in international competitions. Our people believe that if we applied ourselves correctly, there is talent in unexplored parts of our country like Okavango, Ngamiland and even Kgalagadi. Some people say that the problem is that we are too focused on the A1 Highway for our talent pool, instead of scouring the length and breadth of our country like the Zebras gaffer P.J Butler who believes there is ample and unique talent that is yet to be unearthed in other parts of our country which is also influenced by the environmental and other factors that can give our athletes a competitive edge. We know that Minister Olopeng’s instinct, if he sees this opinion maybe to react like he is being attacked: Our intention however ever is to challenge him to rise to being a leader that he has shown himself to be capable of being during his several spasms of inspiration. Batswana are tired of playing small, and setting lowly targets as we did for Rio 2016, what we need is a bold new strategy for world athletics domination, Mr Olopeng, please lead the way and let us dare to take on other world greats instead of being consumed by gossip and paranoia of Facebook.

Of partisan political party activists and the media
We note with concern the tendency by some political party activists who like to drag the media into their internal partisan struggles, and when their designing and scheming does not work, turn around and accuse the media of being drivers of propaganda. While some of the criticism of the media over several ethical issues is warranted, it is worrying that some party activists think that they can get away with trying to plant their factional propaganda in the media and when such attempts are scrutinized, turn around and say the media is takes sides. For all the criticism it gets, the media never exposes some of the elaborate attempts by some people in political parties to co-opt it into their infighting because sometimes it is not the most important thing in the world to do, however, when the same people go around grandstanding as moral prefects and critics of the media, it raises questions on what it is that they want the media to do, to become their lap dogs or make the media their convenient scapegoat as usual? Double standards must fall!

Minister Olopeng: Stay off Facebook and lead our sports revolution! 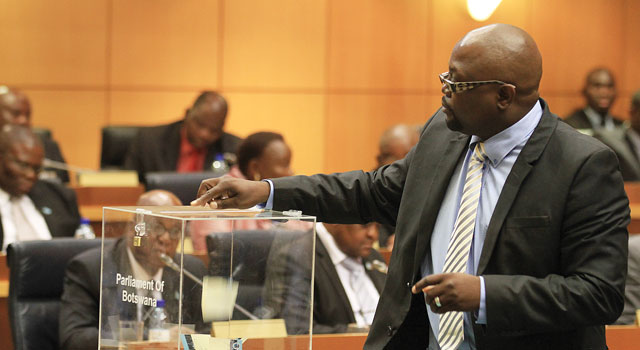