Breaking its year hiatus, the Bessie Head Literary Competition is back with some exciting improvements. The competition, which continues to conserve the legacy of renowned writer Bessie Head through literacy development, has nabbed three of Africa’s writing stars as judges for this year’s short story competition; Zukiswa Wanner, Karen Jennings, and Fiona Snyckers.

Speaking on the judges, Bessie Head Trust member Mary Lederer said having talented, well-established writers as judges brings a fresh perspective to the competition. “We want to improve the visibility as well as the growth of the competition and get a different view on submitted stories. In the past, we have had great local judges, but this year we are interested in having diverse perspectives from these accomplished writers on Botswana’s emerging writers,” explained Lederer.

The judges, who continue to carve a literary mark in their respective countries and the international writing scene, have some noteworthy accomplishments:

Wanner—a widely published journalist and novelist, was listed among Sub-Saharan Africa’s most exciting writers under forty and was included on the Hay Festival’s Africa39 list.

Snyckers is the author of the popular Trinity series of books and she graduated from the University of Witwatersrand with a first class masters’ degree in English literature.

Jennings is the author of Finding Soutbek and the short story collection Away from the Dead. She also edited the anthology of short stories Feast, Famine and Potluck for Short Story Day Africa in 2013. She holds masters’ degree in English literature and creative writing.

Recently, the Bessie Head Trust also organized a writer’s workshop which was a first of its kind since the prize’s inception to improve the caliber of writing for the competition. “During the workshop, participants got to learn the importance of revisiting their work. Facilitators had excellent exercises so that writers know that there’s a process that comes with writing a story such as proof reading and even reading what you have written out loud to ensure that it makes sense,” said Lederer.

The public is highly encouraged to submit their manuscripts for a chance to be awarded the literary prize.
For an opportunity to have your work read by these accomplished writers, submissions had to be sent online to bessiehead@gmail.com as a Word document attachment.  There is no theme and the maximum word count is 5000 words. Only citizens and residents of Botswana are eligible. The deadline for all submissions was yesterday (15 September 2015) and this year’s competition is for short stories only. For complete information on formatting and other requirements, see the Bessie Head webpage at http://thuto.org/bhead/html/awards/CompetitionGuidelines.htm

The competition is made possible through the efforts of the Bessie Head Heritage Trust and this year’s proud sponsor of the prize, Diamond Educational Publisher. 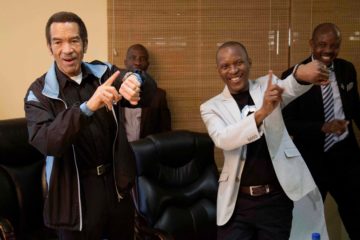