Molapo Piazza was filled to the brim this past weekend as many gathered to celebrate the Fete de la Musique Festival, which draws its origins from France. The festival grows each year and it has grown beyond just a music festival to a social gathering for families, friends and loved ones. This year’s festival catered for all the ages; it started during the day to provide for the kids while a much older crowd came late in the night for evening performances.

As is norm, upcoming artists were given a chance to showcase their talent as well as feature in the performances of major acts. The new venue, Molapo Piazza, gave this year’s festival a unique feel as there were visuals on screens correlating with the different performances. There were 50 acts in the lineup, varying from in genre from jazz, kwasa, hip hop, afro pop, traditional, to electro funk.

In the last half of the show, it was local performers Zeus, Vee, Cupid, Kuchi and performance artist Moratiwa Molema who wrapped up the show in style. Zeus incorporated smaller acts into his performance while King of Kwasa, Vee, also gave an electrifying performance along with his energetic dancers who left the crowd in awe with their stunts. Towards the end of his set, Vee shared the stage with an upcoming group, Xhibit. Dj Cupid dedicated her set to French music while Dj Kuchi performed with Zeus. “I particularly liked this year’s festival because there were more local acts and we got a chance to enjoy local music and see new faces in music. And the fact that they were performing along side established acts gave us a chance to see them in a different light and give them a chance,” expressed a reveler, Tshelang Mokone.

One of the performers, Zeus, commented; “It was great to be at the Fete de la Musique again this year, I think it is well established now.  For me it is definitely one of the top 5 events that I look forward to in Gaborone and arguably even in Botswana. I think in terms of pulling a decent crowd, I think it’s amazing how people show up every time, it’s not easy in Botswana to get an event that pulls more than a thousand people.”

He further expressed;“In terms of supporting local acts, it goes without saying that they have an exclusive local line up with a couple of acts from elsewhere but from what I understand some of them reside locally like the Congolese Rhumba acts reside in Botswana. So, in a way they are local acts and to see people give audience to  people who they are not familiar with is quiet a powerful thing. Local acts that I particularly enjoyed are Harmonic Angels, I only got to hear their style and music last week as we were also in a workshop together a few days before the festival and it was the first time I had seen them perform live. What I find impressive is when younger artists craft their own thing, so I think Harmonic Angels are definitely an act to look out for if developed properly. I think they could even grow to internationally standards because they have something authentic, something that a lot of our artists turn to ignore.” 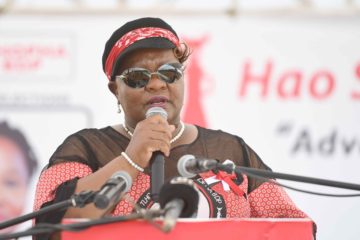