Health Bill
President Ian Khama signed the controversial Public Health Bill despite discontent from human rights organisations such as Ditshwanelo and Botswana Network on Ethics, Law and HIV/AIDS (BONELA). The law, amongst other things, makes it compulsory for sexual partners to disclose their HIV status to each other.
BONELA condemned the law and its Executive Director, Uyapo Ndadi said that there was a possibility that the organisation take government to court because the provisions are unconstitutional in that they encroach on the right to privacy, take away the dignity of people living with HIV, contradict equality clauses in the constitution and that they are discriminatory against people living with HIV.

Judiciary
The Chief Justice Maruping Dibotelo threw the judiciary system into disrepute when he accused High Court judges of receiving bribes from some lawyers and litigants. In a strongly worded circular addressed to the Attorney General and legal practitioners, Dibotelo insinuated that some of his colleagues could be benefiting from underhanded dealings. He accused the judges of forum shopping and said that will be a thing of the past.
Judges downed tools following the attack, demanding that Dibotelo substantiate his allegations. They said the statement by the chief justice had put the judiciary in disrepute and destroyed the trust that Batswana had on it. The judges compelled him to make an apology, although that did not stop his colleague at the bench, Tshepo Motswagole from suing him.
BOFEPUSU joined the fray and condemned Dibotelo.

Death penalty
High Court Judge, Justice Tshepo Motswagole kick-started another debatable issue, regarding the legality of the death penalty as he declared it unconstitutional. After making his stand, local media reports suggested that the death penalty had been abolished in Botswana. The topic stirred up passions with uproar ranging from comments that justice would be denied to the victims of murder to arguments over the legality of the alleged suspension.
To add fuel to the fire, a local media suggested that there will be no more hangings unless the government challenges the High Court ruling by Justice Motswagole that “outlaw the death penalty”. The publication alleged that attorney Kgosietsile Ngakaagae announced that as a result of the High Court ruling in a case involving Rodney Masoko who was accused of murdering Gloria Zwemisi in 2006 in Francistown, there will be no more hangings in Botswana and they shall remain suspended until Justice Motswagole’s judgment is overturned at the Court of Appeal.
Attorney Martin Dingake said in an interview with this publication that the death penalty had not been abolished nor suspended. Dingake said, “It will be wrong to suggest that it has been suspended or abolished. The death penalty is part of our law and remains entrenched in the Constitution.”
One other interesting thing to note about the death penalty this year is that the court of appeal spared the lives of close 6 death row inmates by either a reduction of sentence or overturning their convictions.

BONELA
After spending four years being the face of rights advocacy in Botswana, Botswana Network on Ethics, Law and HIV/AIDS’ Executive director, Uyapo Ndadi took a final bow at the organization towards the end of 2013. The outspoken lawyer had a highly active year continuing the lobbying for gay rights and the legalisation of prostitution. Sindi Kelemi will take over from Ndadi from January 2014. Ndadi is currently pursuing his private practice.

Francistown West bye-elections
Possibly one of greatest infringements upon the constitution was sparked of by the controversies of this bye-election when the death of BDP MP Tshelang |Masisi created a vacuum in the constituency. During the BDP primaries the constituency was won by Ignatius Moswaane over Whyte Marobela and two others.  What followed was internal bickering in the BDP which culminated in the president’s proclamation to postpone the election entirely. What was seen as an internal party matter created a chain of events that led to the move which was unprecedented in the history of the country. Public outcry criticised the president for abuse of discretionary powers.
The BDP central committee
It was a mess of a year for the ruling Botswana Democratic Party’s central committee. The party leadership was besieged by complaints from the rank and file of the party, post what has evidently been a shamble of primary elections. Protests from the elections were poorly addressed as only a few were acted upon, notably the Ramadeluka Seretse protest that saw a re-run of the Serowe North primary elections, which Seretse went on to lose again.
Kgotla Autlwetse won the battle that has taken him to the depths of political gallows over a period of 10 years. Autlwetse, a former council chairperson, has been contesting for the constituency in the last three bye-elections only to be casted out by his arch nemesis, Seretse at all the three contests. Despite an unconventional re-run which was the result of one of the youths of the BDP kicking a ballot box, Autlwetse was able to triumph in spectacular fashion as he won all the wards,  putting a spanner in Seretse’s rumoured plans to assume the vice presidency .

Guma Moyo
The man who managed a political comeback for the record books saw his star go bust in less than a year since his return to the BDP. Moyo ascended to the second most powerful position in the party, the chairmanship, after defeating Pelonomi Venson-Moitoi in a hotly contested race in Maun mid year. Moyo resigned unceremoniously from the position after four month amidst allegations that he sought to influence president Khama’s succession plan with the help of the current Zimbabwean regime.

DTC relocation
A ten-year agreement between De Beer’s Diamond Trading Company and Botswana government finally saw the relocation of the diamond cutting and trading to Gaborone. The deal will see sightholders from all over the world fly to Botswana ten times in a year on a purchase mission. The first sight was successfully held in November of this year and those who travelled to purchase diamonds gave Botswana sterling reviews.

Parliament of Botswana
The 10th session of Parliament was fairly busy this year as legislators took an active role in holding the executive accountable in 2013. Parliament through its several committees such as the Public Accounts Committee (PAC) led by Member of Parliament for Lobatse, Nehemiah Modubule, summoned several government departments and parastatal heads to account for their budgetary spending. The PAC seating produced some eye sores for the MPs as there were revelations of abuse of public funds and authority by public servants. The Public Accounts Committee uncovered imprudent use of public funds, for instance the return of nearly P4 billion unused money to the treasury and other wrong doings by various government departments.
The select committees that were created to investigate the Botswana Development Corporation (BDC) and Botswana Meat Commission (BMC) brought to light gross practices that led to government losing billions of Pula and Botswana losing the European Union beef market through reports published by the house.

The Mosu saga
Government spokesperson, Dr Jeff Ramsay came out with an egg on his face in 2013 as controversy spewed over the building of an air strip on the personal property of President Ian Khama in the village of Mosu in the Boteti region. Ramsay’s denial that the land did not belong to the President but rather to the state, and that the airstrip was to be used by members of the public were proven to be infact incorrect as the Minister of Presidential Affairs and Public Administration, Mokgweetsi Masisi put it on record in Parliament that the Botswana Defence Force was building the air strip on President Khama’s personal land. 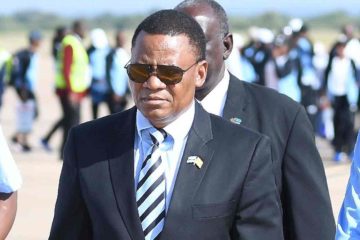