Botswana based referee Joshua Bondo could be in line for a place among the match officials for next year’s Africa Cup of Nations (AFCON) tournament. The Selibe Phikwe native’s numerous continental assignments in the past two years suggest that he is highly regarded by the CAF Referees’ Committee.

If selected Bondo could become Botswana’s first ever referee to officiate at the continental competition in Morocco next year.
Bondo is the only Motswana referee in CAF’s Elite A roster, the selected group is often given high profile matches and they make up a pool of officials who are normally given slots at continental competitions such as AFCON. He obtained the Elite A status after completing two separate courses held in Egypt in recent years.

He officiated five games in the African division of the 2014 World Cup Qualifiers and notable games include the Nigeria versus Kenya clash as well as the DRC and Libya clash. Bondo was also appointed the fourth official during the highly contested World Cup playoff between Burkina Faso and Algeria.

The local referee has officiated heavyweight games in the CAF Champions League such as the AS Vita and Zamalek clash last year; the encounter was played at the Stade des Martyrs in Kinshasa, DRC.  The Kinshasa based stadium has a capacity of 80 000 and is known for its hostile environment but Bondo was unfazed by the pressure.  Last month he took charge of the CAF Champions League second round clash between AS Real Bamako and Esperance.

An award at last year’s CAF under 17 Championships has also enhanced Bondo’s credentials; he was voted the second best referee in the competition.
Despite Bondo’s credentials there could be one stumbling block; in recent years referees in a single AFCON tournament were dominated by French speaking and Northern countries. In last year’s competition 18 slots were allocated for referees from French speaking and Northern nations while only five referees represented the Southern African region.

However, Bondo could find solace in the fact that he is Southern Africa’s most consistent and prominent referee in the past year and that could help him earn a place in the 2015 competition.
Botswana has 11 FIFA accredited match officials; the group consists of six referees’ assistants and five middlemen. Oamogetse Godisamang is in the Elite B roster, he officiated in the 2014 CHAN tournament. 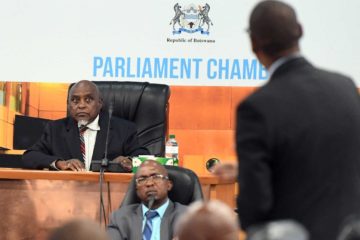