Sparks are expected to fly in the Serowe region where bruised Botswana Democratic Party (BDP) will be looking to reassert itself after being declared ‘dead’ by BaNgwato paramount chief Ian Khama who is campaigning for the opposition.

The BDP is plotting how to enter the lion’s den in both caution and style, paying particular attention to the damage already caused by Khama who is arguably on a survival mission as a politician. The Gazette understands that the BDP wants the backing of Pelonomi Venson-Moitoi and Tshekedi Khama who are influential figures in the Khama, and now Botswana Patriotic Front, heartland. The two are very close allies of the BDP’s number one enemy in the region, Khama, and have up to now refused to buy into Khama’s newfangled party for the reason that the BPF is self-serving and not in any way beneficial to them.

The BDP wants to use the two to at least neutralise Khama’s effect and reposition the BDP where it can compete. But it won’t be easy. Just recently, the two were seen as Masisi’s enemies and were vilified for their association with Khama. While the carefree “TK,” as Tshekedi is more affectionately known, has adapted quickly, Moitoi, who is a political hard core but quite fragile in nature, coming back into the fold has not been very easy and so is shy to generously associate. In an interview with this publication on whether she will partake in the Serowe make-or-break launches for Tshekedi and Kgotla Autlwetse, she declined to commit. “Please allow me to rest,” came her response. “I do not want to discuss politics.”

A source in the BDP says the party should do more to motivate Moitoi and TK to protect Masisi, “I understand they are still at the negotiation table with the president,” says the source. “We do not know the details.”

The BDP’s Head of Strategy, Comma Serema, has confirmed in an interview that Moitoi is much sought after. “Moitoi is part of the pool that has been selected to campaign for votes in the Serowe constituency,” Serema said. “However that will depend on her availability.”

Another source says the BDP has deployed teams on the ground to speak to BaNgwato away from the madding crowd of public gatherings that often come with mob thinking. “These groups are educating and engaging with the electorate, stating the facts and listening to the electorate,” says a senior member of the party.

In the meantime, the parliamentary candidate for Serowe West, Tshekedi Khama, has decided to reject efforts by his older brother, former president Khama, to ditch the BDP for the BPF. He and Moitoi are said to have advised against the formation of a new party and their rejection of Khama is said to be working against Khama’s agenda as it has left the Serowe constituents so confused that some who had initially bought into Khama’s rhetoric are retracing their steps back to the BDP.

The BDP’s Executive Secretary, Ame Makoba,yesterday (Monday) told The Botswana Gazette that Tshekedi would launch on the 28th of this month and that Masisi had undertaken to launch him together with Kgotla Autlwetswe, whose launch will be this Sunday. Khama has not said much about Autlwetse and seems not eager to. The reverse is also true.

Khama recently invaded Tshekedi’s constituency with the aim of having the constituents heap more pressure on “TK” to dump the ruling party just a few weeks before this year’s general elections. His efforts have so far been in vain.

According to several sources on TK’s campaign team, this is a huge relief in the midst of talk linking him to the BPF. More than three council candidates in Serowe West have already joined the BPF, thus forcing the BDP to field new candidates.

Ironically, some of “TK’s” resources are being used by the BPF. His personal combi, which was mostly used to mobilise voters for him and his councillors, is now in use for similar purposes for the BPF. This is said to have been one of the reasons that prompted the Serowe West branch to write recommendations to Masisi and the BDP Central Committee to suspend “TK” from the party in June. Despite this, “TK” has maintained that he remains committed to the BDP. Even so, speculation is rife that should there be a hung parliament, “TK” would be the first to defect. This has also sparked thinking about immediate anti-floor crossing legislation such by Masisi, should he win.

On Friday last week, “TK” was one of the speakers at the launch of candidates for Mahalapye West. He preached unity and respect. Some pundits have since suggested that his speech was a clear statement of his commitment to the BDP while others regard it as a classic case of convenience. “Our parents went around this country to pursue voters to vote for them,” said Tshekedi. ‘They did this with the utmost respect and love. We cannot lose these values at this time. “Sometimes politics turns us into people that we really are not. That is why you see some people leaving us and joining other parties. We really need to introspect and ask ourselves where we have gone wrong and why they are leaving.”

“I personally refuse to think everything is alright when I see them leave. We need to go out there and bring these people back to this party. Many times as democrats we don’t agree on a lot of things, which is never really a problem. Some of the people who have left are our family members and relatives. Even you some day will leave this party, but we will go out and fight to bring you back. We have stalwarts like bo Mma Tshireletso (Botlhogile) and bo Rre Patrick Balopi who have proved that once you join this party, you remain committed to it until you reach your old age.” 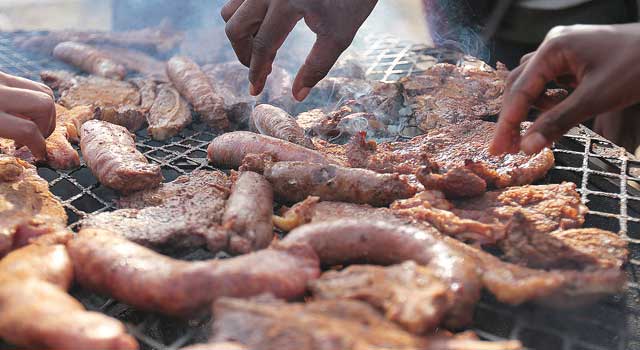