The Botswana International University of Science and Technology (BIUST) is allegedly facing internal strive driven by personal vendettas and political ambitions, which could derail the half a billion pula plus project.  It is alleged that personality clashes dating back to former President Festus Mogae’s reign are at the center of the long running feud at the institution, which has resulted in the imminent sacking of the BIUST Council Chairman.

The Botswana Gazette is informed that the Office of the President has made recommendations for the Minister of Education and Skills Development to consider possible termination of the services of Serwalo Tumelo as current Chairman of the BIUST Council. The same communiqué also recommends for the appointment of Chief Executive Officer (CEO) of Selibe Phikwe Economic Diversification Unit (SPEDU) to be rescinded and for the Minister of Trade to commence fresh recruitments for the post. The Botswana Gazette is informed that Tumelo was recommended as the ideal candidate for the position of CEO of SPEDU, given his illustrious career in the public service. As both BIUST Council Chairman and CEO of SPEDU, Tumelo would complement efforts to align the two institutions, which have partnered in various projects like formation of a mining museum and establishment of a regional campus. Tumelo has confirmed that he was aware of some document discussing his imminent termination.“Nobody has said anything to me formally but I have seen the document and forwarded it to BIUST management,” he said.

News of the impeding termination has been received with shock by most senior BIUST employees.
“We are in shock over this. This, if true could spell disaster for the university!” a senior employee who asked not to be named said.
It is understood that BIUST Vice Chancellor Professor Hillary I. Inyang, who was recruited by Tumelo, has threatened to resign from his position should Tumelo be removed, a development that Tumelo said would spell doom for the BIUST project.

“It would be very hard to get someone of his calibre. They are in demand and you don’t just find them at home waiting to be approached,” Tumelo said.
However, he Tumelo said was not aware of Inyang’s threats to resign, “Ask him yourself,” he said.

“I know that my tenure and that of the Chairman will come to an end in October and as such there is no need for termination,” he said.
But Sebetlela’s claims that Tumelo’s tenure was coming to an end in October were refuted by BIUST Director of Communications Shakie Kebaswele, who said the Chairman’s tenure ends next year October because it is longer than that of the other members. Kebaswele also confirmed that they are in possession of the communiqué recommending Tumelo’s sacking, but could not confirm its authenticity.

“We have the communication in our hands but it’s unclear whether it is official or not. However, it’s still worrying,” he said.
The Botswana Gazette is informed that the communiqué emanates from a cabinet meeting of July 16 at which allegations of irregular staff recruitment at BIUST were made. While he admitted that there were allegations of irregular labour practices at BIUST, Kebaswele said such allegations were based on ignorance of international standards of engaging university personnel.
“University statutes empower the Vice Chancellor to appoint academics of high standing without advertising as well as host visiting professors for no more than 12 months. It is an accepted practice worldwide,” he said.

He further expressed worry that such news will affect BIUST negatively as already they were received with shock by senior academics and most staff members.
“We fear the worst. It is difficult to attract the best talent if such an incident occurs. An upheaval like that would undo all the good work that the Chairman and the Vice Chancellor have put in,” said Kebaswele.

The BIUST Vice Chancellor was not immediately available for comment as he was said to be travelling back to Palapye after a meeting with President Khama. Government Spokesperson Dr Jeff Ramsay denied knowledge of the matter, while Acting Minister of Education and Skills Development (MoESD) Mokgweetsi Masisi could not be reached as his phone rang unanswered. 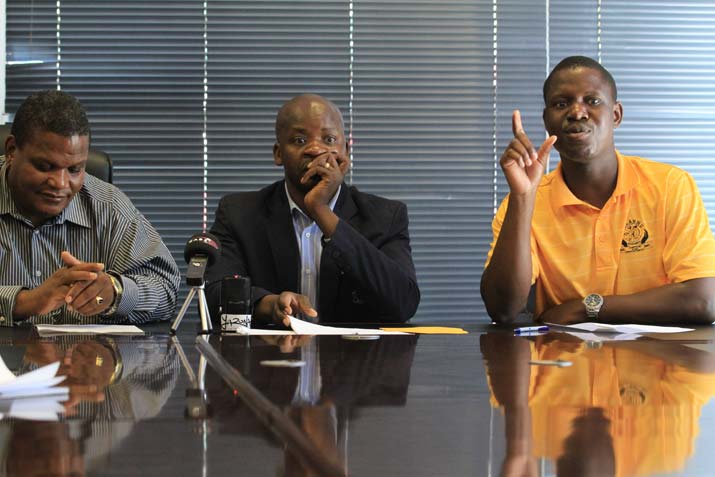