FRANCISTOWN: In the aftermath of the recent sudden closure of BOSETO Mine in Toteng, Botswana Mine Workers Union (BMWU) has filed an urgent court application seeking judgement to attach mine property.

Recently, dark clouds fell over the mining giant Discovery Metals Limited when Boseto Copper Mine was ultimately closed leaving 422 employees jobless. The sudden closure of the mine was constituted by failure to pay the Lender Group, a group of companies which financed the set-up of the mine. To this regard, Botswana Mine Workers Union (BMWU) is currently seeking court intervention over the future of around 200 employees who are members of the union. BMWU President Jack Tlhagale told the North Cast in an interview that they are now seeking the intervention of the High Court. Through Moses Kadye Attorneys, Tlhagale said that they have made an application seeking the court to attach the mine properties which include among others mine houses, machinery and equipment.  Tlhagale stated that they took the legal route in order to avoid a situation where the mine will not pay the employees. “We filed an application last week Thursday and we are only awaiting the dates to appear before court,” said Tlhagale.

According to Tlhagale, the mine owes the employees a lot of money that will cost the company in excess of millions of Pula. These dues include among others salaries and terminal benefits. 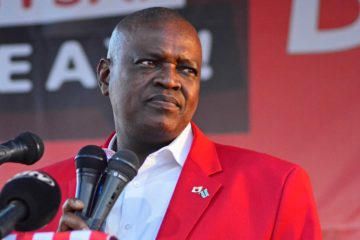