The Botswana Federation of Public Sector Unions (BOFEPUSU) Labour Secretary, Johnson Motshwarakgole, has vowed to de-campaign the Vice President, Mokgweetsi Masisi, on his bid for Botswana Democratic Party (BDP) Chairmanship. He announced at a press conference on Friday that they are launching a campaign against the Vice President and would get as many BDP members as they can to vote against him.

“If we are not careful we will all find ourselves in trouble because of him. I would like to appeal to peace loving BDP members to help us in our mission to make sure he does not win the party chairmanship. We are disqualifying Masisi because we do not believe he has the best interest of the people at heart, but this is not to say we are endorsing anyone. All we are saying is that members should vote for someone who is honest, somebody who acknowledges there are problems in this regime, not someone who always pretends that everything is okay and thinks there is no need for any reforms,” he said.
This development follows government’s decision to withdraw the multi-million Pula scheme, GEMVAS, from trade unions by the end of this month. GEMVAS is a scheme that is currently being administered by UNIGEM under trade unions after government agreed in 2010 to outsource to trade unions the motor vehicle scheme that also offers loans to civil servants to enable them to buy houses. According to Motshwarakgole, the decision to take the scheme from trade unions is believed to be a plan initiated by Masisi in his quest to shut down trade unions because he is hostile towards workers and civil liberties.

Motshwarakgole said if need be, they will go as far as Mmadinare where the party’s elective congress will be held in July to discourage BDP members from voting for him. “We will see a regime worse than the current one if we let him ascend to power. Our hope is that he only gets to be a president from 2018 to 2019 if he does ascend to power. It is very important that we cut his reign short lest we find ourselves in trouble. Imagine having a President who is a self-proclaimed boot licker. We will call on powerful demonstrations because we believe he is out to get us all,” he said.
BOFEPUSU Deputy Secretary General, Ketlhalefile Motshegwa said they have found out that though they have been told to hand the scheme back to Government next month, government still does not have the capacity to administer the scheme as it lacks the necessary softwares, facilities and human resources. He said this has led them to believe this is just part of their plan to unleash an economic unholy war against trade unions as they believe it will cripple them. He stated that government has violated the civil rights of its employees by going back on policies that they agreed upon and thus have resorted to take the matter to court on an urgent application. 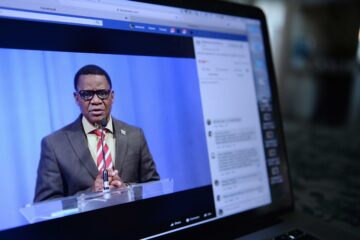