DHL Express Botswana Country Manager, Mokgethi Magapa has described Botswana’s contribution of 3 per cent to DHL’s business in the Sub Saharan region as quite substantial. He said this during a meeting that he, together with the company’s Marketing and Communications Manager for Southern Africa, Khanyi Mamba, had with the media last week.

“Botswana contributes quite handsomely. I think it contributes about 2 to 3 per cent and remember we have 52 Sub Saharan countries. Botswana is in the top 20. It is quite substantial for Sub Saharan Africa,” he said, noting that South Africa is number one and is followed by Nigeria.

He sees the Botswana office as being strategic to regional operations: “The economy is stable, is growing and is predictable. The office is also a hub to Namibia and Zambia, not only on the monetary aspect but also from a strategic point of view.”

Such attributes notwithstanding, the Botswana office has to contend with some challenges.
“The biggest challenges obviously are around customs because those are the guys that impact on our business. Remember our business is between countries,” Magapa said.
The challenges involve both customs’ regulations and operational issues. For a business where time is of the essence, DHL has to fit its work schedule around a customs system that does operate around the clock. Magapa’s suggestion is that customs should be open 24 hours or allow forward shipments to customers as well as clearance to be made when the office opens. He said this is the procedure in other countries – especially for trusted companies such as DHL. He suggested that pre-clearance (like it happens in Nigeria) should be undertaken to resolve this issue.

The DHL managers also updated the media on the DHL-Engen partnership that will see the former using the latter’s retail outlets to do their business through a retail product called Express Easy. Khanyi said they started with six pilot stores and the product will be launched next Tuesday. The outlets at Engen will bring the total number of DHL retail outlets in the country to 90. The company is also in retail partnership with mobile phone shop, Cell City.

Magapa said the partnership with Engen is already bearing fruit in Namibia.
“It is contributing quite handsomely to the shipments in Namibia. Ever since the launch of Engen in Namibia, we have seen an improvement in our business in terms of retail contribution to the whole business,” he said. 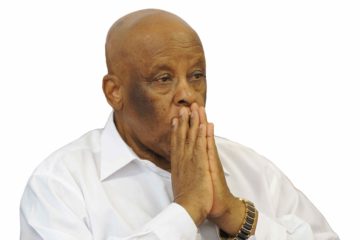