Major David Bright’s departure from South African National First Division side Royal Eagles FC sent shock waves in the football fraternity this past weekend. His dismissal occurred less than a month after he was appointed. Zimbabwean striker Tendayi Nyumasi is currently on trial at Eagles and Bright’s dismissal could spell uncertainty for him since the former Gaborone United coach was responsible for recruiting him.
Reports from South African media outlets stated that Bright was dismissed after a misunderstanding with the club’s management. The side’s management team was reportedly unimpressed by Eagles’ 1-1 draw with lower league side Kings FC, the practice match was Bright’s first and eventually last match in charge of the Durban based club.
Sources indicate that Eagles’ management believed that their failure to beat the ABC Motsepe League side was not the ideal preparation for the upcoming season. Observers have criticized the club’s decision to dismiss the former Gaborone United coach despite giving him little time to assemble a team  of his liking. Assistant coach David Notoane is set to take charge on an interim basis.
Bright invited Nyumasi for trials last week, the striker has been training with Eagles while hoping to secure a permanent contract. The experienced coach has been trying to sign Nyumasi since January. He attempted to sign him in January transfer window when he was at GU, the move failed to materialize as  Ecco City Greens and Moyagoleele failed to agree on a fee for the transfer of the striker.
When Bright was in talks with Engen Santos he had targeted the Zimbabwean as one of his first signings. The Santos deal collapsed and the former Zebras coach joined Eagles in June, one of his first acts was to invite Nyumasi, Edwin Olerile and Lesego Galenamotlhale for trials after they were unsuccessful at FC Cape Town.
However, Nyumasi was invited for trials at Eagles without the knowledge of his agent, Comfort Ramatebele (Glamour Sports International) who had organized trials for Nyumasi and other clients at Chippa United and FC Cape Town. Ramatebele informed this publication that he is unaware of the player’s trials because he was still awaiting permission from Ecco to send the player to Durban.
“As far as I am concerned Nyumasi is in Francistown. If anything linked to trials has occurred we are not aware of it, that would make us unhappy because of the process that has led to his trip to Durban. We went through a lot to organize trials for him. We wish him all the best if he manages to move to SA, he deserves such a move because he is a hard worker. We would be happy for him nonetheless,” Ramatebele stated. 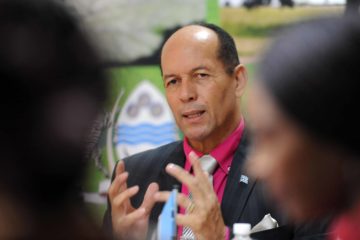