Well-known Gaborone businessman and socialite Victor Jimere has found himself on the wrong side of the tax collecting agency, BURS following allegations of false declarations leading to tax liabilities exceeding P25 million through his engineering and electrification company Inex Investments, court records reveal.
Investigations by BURS into Jimere’s financial dealings have alleged that his accounting is willfully falsified in efforts to evade paying taxes such as in his purchase of Unit 4B at the iTowers building, which “was used as way to hide income generated by the business.”
Last week, Jimere dragged the Commissioner General of Botswana Unified Revenue Services (BURS) before the High Court seeking that the freezing of  his company bank account be set aside  and  that the cars impounded by the tax collecting agency be also returned to him.
Three  of Jimere’s cars;  a Ranger Rover Sport, E63 Mercedes Benz  and  a Hilux Raider  were attached and detained,  all  other 14 cars and a motor cycle flagged at the Department of Transport , a plot also attached for failure to pay outstanding balance of VAT, penalties and interest.
Facts of the matter are that Jimere was selected for audit on 22 April 2014, and his accounts subsequently frozen with BURS demanding payment of an outstanding balance of P24, 526, 938 in lieu to Income tax of P15 million, Vat of P8 million,  withholding tax of P1.5 million and PAYE at P650.00.
The businessman who hails from Masvingo, Zimbabwe made news in January when media reports alleged that he was involved in an accident in which a South African cyclist lost his life near Phakalane.
The court papers which this publication is in possession of show that BURS is demanding that Jimere’s impounded vehicles be taken for an auction sale to recover owed taxes, while Jimere’s request to set aside the 200% penalty fees charged to him have been denied.
Jimere,  as the Managing  Director of  Inex Investments filed an urgent application  before Lobatse High Court Judge Abednico Tafa  against   Commissioner  General  of BURS  and  Kaone Molapo, General Manager Compliance , being 1st and 2nd Respondent respectively. The proposed urgency of the matter was denied last week Thursday.
In his founding affidavit, Jimere pleaded for the matter to be heard on urgency as the banking accounts of his company were frozen and monies in the accounts seized by BURS through a garnishee order on 1 June 2016.
Jimere says that his company had no source of funding other than its banking accounts, and that he  was an employer of 158 workers including  the Directors.  “ The 1st Applicant has various contractual and other financial commitments to its creditors which it cannot  honour as it has not the wherewithal , financially to honour such contracts and commitments,” the affidavit reads in part, further stating that the actions of the respondents had severely prejudiced   the applicant and that the situation was dire as all work has been brought to standstill.
The court heard that the freezing of the accounts led to Jimere paying P2 320 819, 87  a  move  the businessman says  indicates that  they have no intentions to shy away from their obligation.
Meanwhile, Jimere further stated that utterances made by  Molapo during a meeting he had with him  made him   lose hope in the objectivity of the audit and the actions of the tax investigations. He also alleges that the BURS intends to deport him back to Zimbabwe where he hails from.
According to Jimere in his affidavit, sometime in September last year,  Molapo  told him that he had been following him for some time and knew his movements.“If you think you are clever I have engaged people to follow you. I have planted girls who will always be around you so that I know how much you spend on drinking occasions,”  adding that he also said  he even knew the colour of his bedroom.  “ (sic)  He further stated that  I will go back to Zimbabwe walking the same way I came and he told me he has put all surveillance in place  for me just in case I was clever, ”  and that “ the ongoing Income Tax assessment will be many times over the audited VAT assessment  and that my properties would be sold by the Revenue Collector and the Bank accounts frozen.”
BURS, in papers brought before the court maintain that the utterances were taken out of context  as they were made during negotiations to reach as  amicable solution. In a letter written by Molapo, addressing matters raised by Jimere ,  Molapo said the statements were made in good faith and were informed by the fact that although the investigations were not yet finalized, there was likelihood of additional assessment. “The utterances  was therefore not made in malice, but was made so that the taxpayer understands the expansiveness’s of the matter and why BURS has to secure the assets against liability.
The matter has  since been set down for argument on 7th September 2016.

How promoted teams can survive in the beMOBILE Premiership 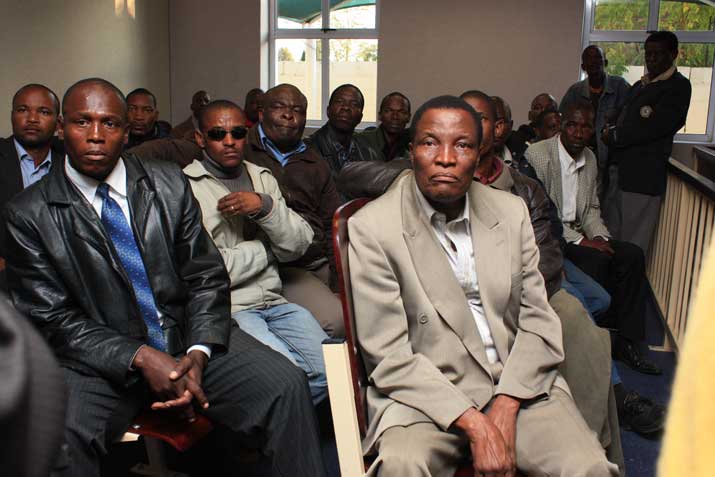