A young and upcoming businessman in Tonota has accused the Ngwato land board of denying him the opportunity to venture into a business that can change his life and those of other youths. The young businessman Setshege Tapela says he approached the land board in 2012 with an application for change of land use from arable to tourism, which they have rejected.

Tapela Kgotla raised his concerns in a meeting held in Tonota recently by the Minister of Youth Sports and Culture Thapelo Olopeng “This is not the first time I complain of this.  I once cried to the President who was addressing a meeting here and he told the land board authorities to assist me accordingly. He dismissed their reasons for not accepting my application,” revealed Tapela.
A letter from the Ngwato land board dated 23 September 2011 addressed to Tapela reads, “we are pleased to inform you that during its Appeals meeting held from 5th to 20th September 2011, Ngwato land board resolved to reject the above mentioned application on the grounds that; the proposed land is outside the village boundary and that the proposed plot is also incompatible with existing land use.”

On the other hand the Tourism department has long approved the plan by Tapela to develop a campsite at Tonota.  “Mr. Tapela intends to venture into tourism business by developing a campsite facility in Tonota, he has a sound vision of what he intends to do with the land. A site visit was conducted on the 4th of November 2010 and observations and recommendations were made,” the letter by the principal tourism officer in Francistown reads.

They also indicated that one of the Tourism Department Objectives is to increase participation of Batswana in the tourism industry as per Botswana tourism Master Plan of 2000. “If the proposed piece of land does not come into conflict with any land use issues, we therefore urge your office to encourage and assist tourism entrepreneurs in realizing their vision and thus contributing to the attainment of the national aspirations of vision 2016,” the letter stated.

When the matter came before the courts, it was ordered that the matter be remitted to the Ngwato land board for consideration within 3 months from the 2nd of August 2012.
“The appellant should be involved in the reconsideration exercise…,” the court order read in part. Up to now however Tapela complains that he has heard nothing from the land board but due to his financial constraints he has not been able to go back to his lawyer and seek help for contempt of order on the side of the land board, something he intends to do the moment he find the money. Ngwato Land Board had not responded to an enquiry on the matter at the time of going to print saying they were investigating and shall avail the information by Monday afternoon. They had not done so at  the end of the working day. 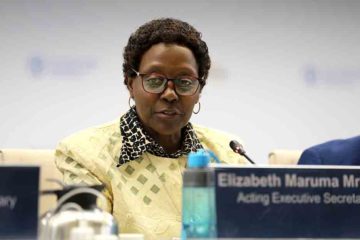