Gaborone High Court Justice Terence Rannoane has dismissed with costs a case in which Botswana Democratic Party (BDP) challenged the decision of the Independent Electoral Committee (IEC) to bar its candidate Ignatius Moswaane from running for a parliamentary seat in Francistown West by elections scheduled for Saturday this week.

Delivering his ruling, Justice Rannoane noted that the IEC was obliged to follow the temporary order by Lobatse Judge Justice Tshepo Motswagole which prohibited Moswaane from submitting his nomination papers to the IEC two weeks ago.

“Our strength as a country lies in our continued respect for the rule of law including respect for court orders even if they can reasonably be perceived to be wrong or unfair. None in this country, including the IEC is above the law, and it was duty bound in the instant case to respect the court order. To hold otherwise would be creating a dangerous precedent which may in future lead to anarchy and lawlessness,” Justice Rannoane said referring to the temporary order of Justice Motswagole.

The judge noted that the IEC did nothing unlawful in refusing to accept Moswaane’s name,  adding that accepting his nomination despite the court order would have mounted to aiding and assisting him to commit a crime of contempt of court. He said Botswana was well-known and respected the world over for its democracy and respect for the rule of law.

The BDP had on October 5th held its primary elections in Francistown West Constituency following the death of the area Member of Parliament Tshelang Masisi.
Moswaane was declared the winner against other three candidates including Whyte Marobela. Aggrieved by the conduct of the elections, Marobela filed a complaint with the central committee challenging the results. He was referred to the regional committee but refused to lodge his case before it arguing that it was not impartial. Marobela then filed an urgent application before Justice Motswagole seeking an interdict of the BDP from submitting Moswaane’s name to the IEC to stand for the bye-election pending the outcome of his protest. The judge granted an interim ruling prohibiting the BDP and Moswaane from submitting his name to the IEC. Subsequent to the order, the central committee sat and listened to Marobela’s primary elections’ and dismissed it for being without merit.

It was then that Moswaane tried to submit his name with the IEC on the deadline of the submissions, but the IEC refused to accept his name on the basis that the court order of Justice Motswagole prevented them from doing so.
Meanwhile, Motswagole’s final ruling which will seal Moswaane’s fate will be delivered on Wednesday. 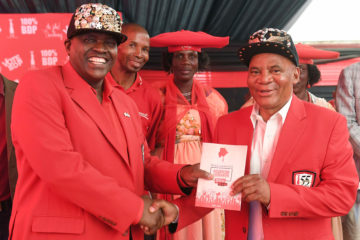