While De Beers registered a positive growth in its diamond production, increasing by 5 percent to 32. 6 million carats from 2013, Bruce Cleaver, Head of strategy and corporate affairs announced on Friday last week at the Group’s 2014 performance results that 2015 will however be a slightly slow-moving year. “We don’t think it will be disastrous by any means, we just think it will be a little bit slower” Cleaver stressed.

The performance results reveal that Debswana contributed significantly to the production increase owed to Orapa and Jwaneng which in total produced 24.2 million carats,  reflecting a 7 percent increase from 2013.

Cleaver explained to Gazette Business that 2015’s slow growth is attributable to the moderate start of the year because of the slow pick from the 2014 Christmas season, with particular reference to the United States of America (USA) market, the largest consumer of Botswana’s diamonds. The Christmas season represents an important season for the sale of diamonds. He also said that sightholder’s (authorized bulk purchaser of rough diamonds) difficulty in accessing credit also contributed to the slow down in the  market. Cleaver mentioned that 2014 performed better than had been anticipated because more sales took place in 2013 due to retailers’ entrance into the market because of their need to re-stock their inventories.

When responding to the question on whether falling international oil prices will have any effect on De Beers’ production, Cleaver emphasized that a permanent decline of oil prices will be good for consumers. This, he said, is because they will pay less for petrol which will result in them having more take-home income in the long run, the effect of which might be increased sales of luxury goods such as diamonds. He however said in the case of Botswana producers will experience a mildy positive effect because the international oil price declines do not immediately and directly trickle into Botswana’s market due to  the government’s control over fuel prices.

In relation to power, he added that Botswana’s rolling blackouts have proven to be a challenge because of the increasing cost of electricity, which they managed to weather thus far. He added that they continue to engage with Eskom on a continuous basis so as to effectively plan for production in such a manner that during load shedding periods the load is lessened. Cleaver admitted that it is not easy which is why they depend on Eskom to communicate its load shedding schedule.

Cleaver announced that the main markets for diamonds continue to do well, with emphasis on America’s sturdy economic recovery, with China demonstrating modest demand and India still difficult to predict. Additionally, new sightholder sales contracts will be introduced with demanding meticulous financial and governance compliance.

The life of a female soldier 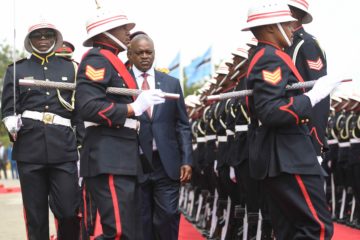