The Debswana Mining Company, the company that contributes the most to the country’s Gross Domestic Product (GDP) last week announced that it recorded strong operational and business results. The company held a press briefing in Gaborone where the Managing Director (MD), Balisi Bonyongo, held his first media engagement since succeeding Jim Gowans as the company’s leading force last year.

In his presentation, Bonyongo said “All our operations delivered very impressive results.” He noted that this was on the back of improving efficiencies. He said Cut 8 waste mining reached peak mining rate of 82 million tonnes per annum. “Cut 8 has now stripped over 50 per cent of the 500 million tonnes of waste required to expose ore,” he said.
Bonyongo said they also delivered a strong set of financial results. The company revenue went up 31 per cent. The record sales revenue was on the back of strong demand and a favourable exchange rate.

The Debswana MD said there were signs of a slow-down in the rough diamond market towards the end of last year and early this year. Part of the reason was that Indian diamond manufacturing was below capacity due to liquidity pressures, the rising strength of the US Dollar against the Rupee, margin squeeze in the mid stream as rough diamond prices increase ahead of polished price, as well as high inventories in the mid stream as a result of delayed demand from the retail end of the business.

On safety matters, Bonyongo highlighted that their safety performance was exceptional as there were no fatalities and serious injuries recorded in 2014. “Our Total Recordable Injury Frequency Rate (TRIFR) of 0.46 is the lowest ever in Debswana and is comparable with the best in the world. All our operations are OHSAS 18001 certified. The TRIFR across our mines has continued to come down as the culture of Near Hit reporting and closure of Near Hits continues to improve,” he said. Debswana’s TRIFR was at 1.14 in 2010, going down to 0.96 in 2011, 0.60 in 2012 and 0.46 the following year. 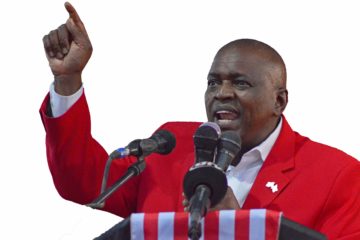