Some members of the Botswana National Front (BNF) say they believe that Gabriel Kanjabanga, who was expelled from the party following his opposition to the umbrella coalition initiative, was right in doubting party president Duma Boko’s leadership and his association with the Umbrella for Democratic Change (UDC).
The activists say Boko is devoid of leadership qualities as he led the BNF into a coalition with the “unstable” Botswana Movement for Democracy (BMD). The aggrieved members are of the view that this was a big mistake which Boko should acknowledge he made and find a way to fix it. They also accuse their leader of indifference.

Candidates who lost in the weekend primary elections at Molapowabojang/Mmathethe constituency are said to be fed up with Boko’s leadership and threaten to leave the party. The losing candidates claim Boko’s leadership has failed them as he does not respond to their letters of complaints and even ignore their telephone calls.
Speaking to The Gazette on behalf of disgruntled members, Jacob Dikuelo who lost to Prince Dibeela by 1, 035 to 813 in the primaries told The Gazette in an interview that they have written numerous letters thus far complaining to the party leadership that some primary elections winners they competed against flouted the party primary elections regulations by campaigning with posters. He also said that in the first place, a person like Dibeela was not eligible to contest because he had less than 12 months in the party. He also complained that even though the deadline for registering voters closed on the 22nd of August, Dibeela and councilors favoured by the party leadership continued to register voters.

Dikuelo said he was deprived of many voters owing to a computer system crash which he said was faked. He said the party leadership with the help of administrators, deliberately deleted names of their voters to suit their favourites and claimed that the system crashed. The furious politician also said some voters who elected the winning candidates participated in other primary elections held before.  He alleged that money was used to buy votes.
He also revealed that all those unhappy in the constituency will convene a meeting on Monday night where they agreed that if their grievances are not addressed they will either stand as independent candidates or join other political parties.
Contacted for comment, BNF Elections Officer Violet Chimela dismissed the allegations and said they have only received one letter of complaint from one individual. She said she then responded to the letter and said it could be only that the complainant is not satisfied with the response. She also said the complainants should consult at a constituency level for issues relating to the voters rolls.

Kanjabanga and Lemogang Ntime among others detest Boko’s leadership and his decision to merge the BNF with BMD and Botswana Peoples Party to form an umbrella. They contend that this move will obliterate the BNF from Botswana politics. The erstwhile BNF diehards have since lodged cases at the High Court and Court of Appeal in their bid to “save” the BNF. 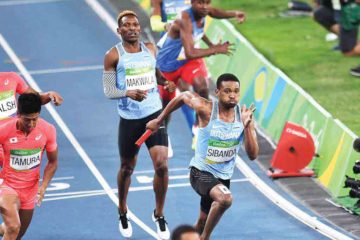