Exciting headliners for the first 2014 All Star Comedy Jam

ajor Moves Comedy will this Thursday present the first All Star comedy Jam session featuring a batch of innovative comedians with fresh materials at the Gaborone Sun Hotel. The show promises to be a night of nonstop laughter with South Africa’s funny and acclaimed stand-up comedian Shampoo, alongside local comedians some industry’s newbies.

The exciting headliners for the show include local Goodie and Brooks and top South African comedian Thapelo ‘Tips’ Seemise known as Shampoo from the popular series Taxi Ride and currently doing comedy on SABC 1 Sports at 10. In 2009 he was a Top 6 finalist on the second season of the SABC1 reality competition talent search ‘So You Think You’re Funny’. Since 2011 Shampoonizer as his fans affectionately call him has been a regular feature at the Blacks Only comedy festivals and in 2012 he landed a leading role in David Kau’s feature film Taxi Ride, which was spun off into a series that aired in 2013.

Two-time President Day Competition winner Brooks has been at the forefront of the Botswana Comedy scene. His unique dry sense of humour and quick wit comedy has made him one of the country’s most popular comedians. He has been featured on the BTV programme Letlhabile and his skits have played on RB2 Saturday sports show.

With a background of hosting live comedy shows, Goodie The Badd, who hails from Serowe, is the first comedian in Botswana to record a One Man Standup comedy show. He is an energetic comedian who likes engaging the audience with his witty satirical views. He attacks Botswana myths while celebrating the different ways in which Botswana tribes express themselves. An eloquent speaker who used to be an English sport commentator on BTV, he is an all-round artist who has also dabbled in poetry and is a self-taught chef and marathon runner.

Other comedians who will be featured on the night include Legustry from Mochudi, Phenyo The Master, Her Majesty Mosetsana and Zimbabwean born Charles.

“Our past show got tremendous support from both the public and the media. We promise a rocking show with this production and we have a bigger, better venue to accommodate more people,” said Proctor. “Our main aim really is to see standup comedy growing in Botswana as part of entertainment and also change the comedy scene in our country,” he added.

Exciting headliners for the first 2014 All Star Comedy Jam 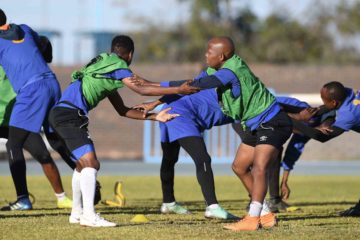