World football governing body FIFA has instructed Township Rollers and Mochudi Centre Chiefs to strengthen their pleas to complete the signings of Jerome Ramatlhakwana and Phenyo Mongala respectively. Both clubs have agreed deals with Cercle Sportif Don Bosco of the Democratic Republic of Congo for the players, but the moves are yet to be finalized due to the timing of the transfers.
The deals were not registered well in time to beat the transfer window deadline. The local transfer window ended 11 days before FIFA’s stipulated September 1 deadline. Both Chiefs and Rollers managed to convince Don Bosco to allow them sign Mongala and Ramatlhakwana respectively.

Don Bosco has not yet processed Mongala’s International Transfer Certificate while Ramatlhakwana is in possession of his.
If both clubs are able to strengthen their cases, FIFA will determine whether or not the deals are finalized. Both Rollers and Chiefs aim to get an extended deadline to register the players for the current season. To do so, they need to present to FIFA valid reasons why they should be granted special dispensation in their applications. Another factor that has slowed the process is the absence of both players’ contracts. Footballers Union of Botswana spokesperson Kgosana Masaseng informed this publication that the players union at the Democratic Republic of Congo has revealed that they are yet to receive copies of the players’ contracts from the parent club, Don Bosco. The DRC players union and the Sports Commission have failed to convene for a meeting that was specifically planned to resolve the matter.

“FIFA has given both clubs a chance to demonstrate why their moves should be effected outside the transfer window. Rollers has written to the Botswana Football Association (BFA) to relay their responses to FIFA. Our DRC counterparts are also struggling to obtain copies of the players’ contracts as that could have helped speed up the process,” said Masaseng.

Gazette Sport has also established that an electrical fault in the DRC might have delayed Mongala’s loan move to Chiefs as his transfer documents could not be relayed. Clifford Mogomotsi, Public Relations Officer at Chiefs, confirmed that the response from DRC came late because of an electrical problem.

“It happened on deadline day and that made things a bit difficult for us. We agreed a deal in principle with Don Bosco for the loan move and we hope to conclude the final details of this transfer very soon. We were supposed to get a response from FIFA on Monday and we believe we will get a response before end of the week,” Mogomotsi stated.

He also confirmed that the initial deal had included Mongala and Dirang Moloi, but the latter is now out of the equation after the he reportedly made it clear that he wants a permanent transfer away from Don Bosco as opposed to a loan move.

No Diamond League Action For Amos This Year 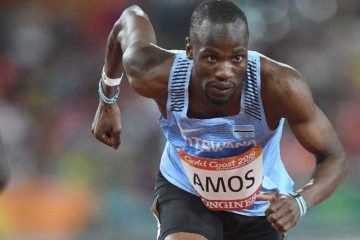