Against the backdrop of a rebound in the global economy during 2013, First National Bank Botswana reaffirmed its ability to remain resilient. This was made evident in the release of the Bank’s unaudited, summarized financial results and dividend announcement for the half year ended 31 December 2013 on Friday.

The Bank registered profit after tax of P362 million,  from P344million during the same period in the prior year. The results were largely driven by the substantial growth in new business for the period under review.

Presenting the results on Friday, Deputy Chief Executive Officer, Richard Wright indicated that the Bank has witnessed the lowest interest rate environment seen in 20 years with the bank rate cut by 200 basis points.

“The interest rate declined by 2 percent which was the lowest in 23 years.  The demand for credit households continues to grow and we are concerned that 66 percent of the debts are unsecured lending. This reprieve in interest rates has led to an expansion in credit growth driven by the Consumer segment. Loans are also more affordable to the consumer. Annual credit growth in this segment remained high at 26.7% as compared to total credit growth of 18.2%,” Wright revealed.

Wright said they have focused on collections, which he said have since improved from P10million a month to P40million a month.
FNBB’s Chief Financial Officer, Boitumelo Mogopa admitted that the consumer is under tremendous pressure and are continuing to struggle to save, therefore their net debt burden is widening for them.

As a result, an investment in infrastructure and people proved necessary to allow for the launch of the prepaid electricity platform as well as the rolling out of Rand dispensing ATMs and slim line mini ATMs during the period. She said they as a Bank have therefore focused on diversified asset book and innovation. “The pressure will continue, given the Bank of Botswana moratorium. However, we will continue to drive prepaid payments and will further launch new products,” said Mogopa.

Commenting on the results, FNB Botswana CEO, Lorato Boakgomo-Ntakhwana “to be able to appreciate our financial results in the context of the global and local economic climate, it is important to understand the challenging times our businesses have been operating in,” said. We have seen no less than five years of significant macroeconomic volatility on a global scale, with this having stabilised in 2013. Despite prospects for developed economies in particular having improved, macroeconomic risks have not disappeared.”

Despite tight liquidity conditions and credit growth being on a downward path, the Bank achieved a 6% growth on total balance sheet. Tight liquidity conditions in the market led to total market deposits held by commercial banks increasing modestly by 2.8%. In spite of this, the Bank achieved a 7% growth in deposits by customers from customers, achieving a growth faster than the market.
The Group’s capital adequacy ratio, which includes the dividend reserve, has been maintained at 19.6% as at 31 December 2013. This goes above the Bank’s internal limit as well as the required ratio by the Bank of Botswana of 15%.

Although operating expenses were 13% higher than those recorded in the same period in 2012, this was primarily due to the Group’s increased investment in the introduction of new electronic channels and the launch of a variety of new products during the period under review.

The shareholders shall be paid a dividend of five thebe per share, and on this Boakgomo-Ntakhwana said “we will continue to be conservative on the dividends going forward.”
FNB Botswana has made a firm commitment towards bringing increased convenience to customers. Looking into the future, the Bank is expected to continue in realising its overall strategy to move customers away from the more expensive traditional banking structures to cheaper banking channels; this, in an effort to build upon robust results and achievements for the first half of the year and taking into consideration the tough trading environment. 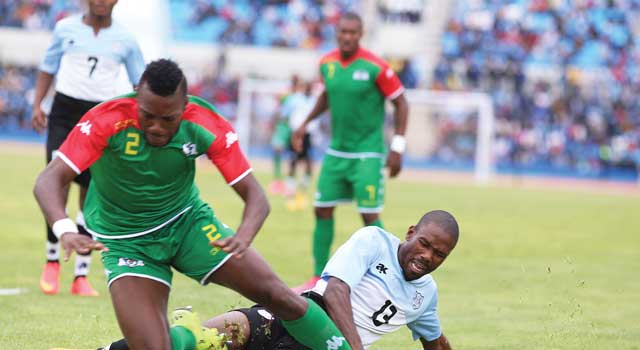