A feud between the Gaborone City Council ( GCC) and property mogul, Sayed Jamali over open spaces in Gaborone, Block 6 has closed out some residents from their yards. This comes after Jamali fenced four open spaces which the GCC has deeds to around Block 6, with one of them closing entrances to two houses, leaving only a pedestrian gate as their only access to their yards.

The residents, through the assistance of the area councilor, Batlhalefeng Letlhage  sought the intervention of the GCC, who  have since written a letter to Jamali over the matter.  According to the GCC, Jamali’s erection of the  boundary fence around open space no 39731  is  an illegal development and has left the properties with no access way.
GCC further noted that, “According to our records the deed of fixed period state grant is in favour of Gaborone City Council. Plot 39731 is an open space  and has been registered under number 749/2014 on the 28th April 2014.” GCC further contended that the fencing was done without a permit from it.
Jamali has been given a seven day notice to remove the fence and allow the occupants to drive into their plots, failing which the GCC will remove it on his behalf.
Reached for comment, Gaborone City Mayor, Kagiso Thutlwe said as the GCC, they own open spaces, including the ones in question and they have deeds to the spaces. Thutlwe said they are surprised to hear Jamali say he has title deeds  to their open spaces, which he said were issued to him by the Ministry of Lands.

“Jamali  was given a lot of space  in Block 6 as part of an agreement that he will help develop the area but that  does  not give him  the right to now claim the whole of Block 6. It is a fact that he has helped develop Block 6 but  he cannot  claim what is not his.”

In his response, the letter which this publication has a copy of, Jamali stated that  the areas in question belonged to him and that he has the rights to service and develop the area. “We have the full and complete rights to service and develop the property and even to redo the surveying and town planning of the whole block and there are many other conditions  attached to the collections  attached to the allocation,” read the letter in part.

According to Jamali, he has done nothing wrong other than follow procedure to service and develop the property. “On plot 39731, we have done nothing wrong, but followed the above-stated procedure and that is within our rights. In fact, a three month notice was given to both the residents of our intention to fence the property. The entrance gate should be facing a road, not another plot,” Jamali explained in the letter.

However, one of the affected residents denied ever being told of Jamali’s intention to fence. “ We were never consulted about the erection of this fence, we just saw the fence erected and obstructing us. I now have to park my car at the police satellite office and walk to my house as I cannot leave it outside overnight,” said the elderly man who seemed agitated.

Reached for comment,  Councilor Letlhage said she was notified about the situation by the concerned residents. “ I have spoken to the GCC about the issue and I together with the families have been moving between the GCC and the Ministry of Lands and nothing has really come out of the visits,”  she explained, adding that they are however optimist that the GCC and Jamali will sort out the issue. 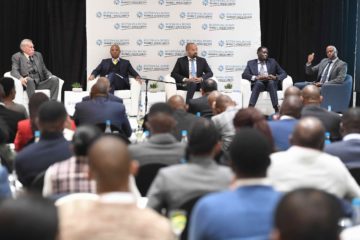