We have received information to the effect that the Public Service Bargaining Council is currently dealing with the 2013/14 salary negotiations. On the 19th August 2013, Trade Union party requested for adjournment of ten (10) days to enable them (BOFEPUSU) to consult with their members thus allowing the Council to resume on the 3rd September 2013 as the proposal stood.

We are further informed that on the 30th August 2013, the Director of Public Service Management (DPSM) wrote a letter to the Secretariat of Public Service Bargaining Council announcing an unprecedented act of withdrawing the Employer’s party from Council. The Botswana Government’s assertions in backing their act include the view that the Council was at the risk of being politicized.  They cite some leaders of the Workers’ Federation who were uttering what they perceived as some political statements.

We also sadly hear that on the 30th August 2013, the same Director of DPSM wrote a letter addressed to the Secretary Generals of BOSETU, BTU and BLLAHWU, stating that the Secretary Generals in question, have in discharge of duties to their unions, violated the Public Service Act and breaching conditions of secondment to those Unions on what he the Director determined as political statements uttered by them, probably individually and collectively.  The letter from the Director was in fact withdrawing the said secondments with immediate effect.  We hear with great regret as usual, the Government has put the Federation in the unenviable position of seeking redress from the Courts and the matter is before Justice Lot Moroka.  The Federation is arguing on account of contempt of a Court Order by the same Judge on a similar matter where he decidedly asserted complete organizational rights of Trade Unions.

As the Umbrella for Democratic Change, we are concerned that this is another ploy by the Botswana Government to avoid the issue on salary negotiations as it means that in the interim the negotiations are on halt and thus depriving Public Servants any hope of betterment of their purchasing power.  The Government appears uncompromising in violations of Workers and Trade Union Rights and neglect of welfare and conditions of service of employees.  They have adopted the avoidance stratagem by citing non issues in order to keep our hard working employees servile salaries while they prefer selected sections of the economy for their attention.  They want to wear down worker organisations through legal battles, disintegrate them by pulling out the central managers and coordinators so that they have them divided for easier enslavement.  The Botswana Government’s melody of justice is one of disempowering to force the nation into being beggars only worthy of gifts from the only Father Christmas of our time.  This cannot be allowed to proceed like this.  Left unabated, this attitude and culture of impunity of the Botswana Government would continue to perilously being injurious to Industrial Democracy of the country and thence give birth to unstable labour relations and an unstable nation.  The continued interference by the Director of DPSM in the affairs, operations and independence space of the Council which is protected by law, is a gross violation that insults the spirit and letter of the labour laws of Botswana as well as international protocols on labour conventions on Collective Bargaining and Social dialogue that we are a part of.

We support the workers of this country in seeking and asserting the existence of Public Service Bargaining Council by law because by withdrawing from the Council, the Employer or government has violated the Public Service Act which created the Council, defined its purpose and directed the continuous carrying out of its mandate.

We support the workers in their struggle all the way and urge Batswana to support them and see through the dishonourable intentions and works of the Botswana Government.  By protecting and standing with the workers, we stand with the nation and its future, we stand with the workers’ capacity to sustain the business sector of the economy; their ability to support the children, the elderly and disadvantaged populaces of the country.  By standing with the workers we support their motivation to continue building the wealth of this country and sustaining its development. The odd element in this whole equation, which must be dealt a blow, once and for all, is the current Botswana Government. 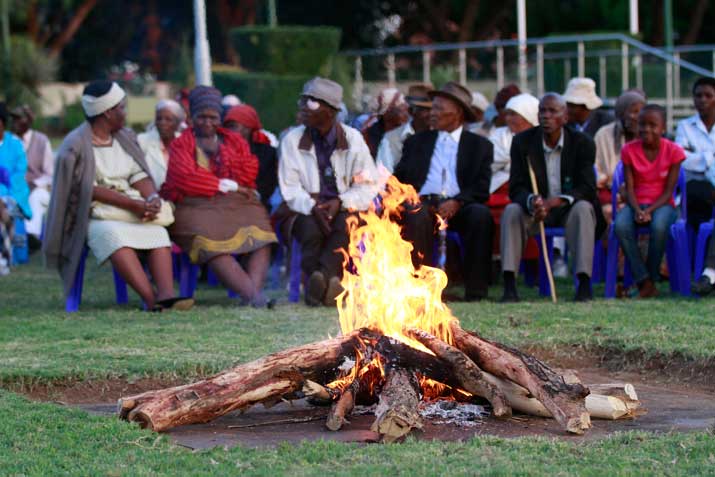