Gaborone United has abandoned plans to sign Ecco City Greens forward Tendai Nyumasi after failing to reach an agreement on the player’s price tag.  The Gaborone based club decided to pull out of the move because of the Francistown club’s valuation of the player, which GU did not agree with.
Nyumasi was Moyagoleele’s main transfer target; the club had targeted the Zimbabwean to replace Makundika Sakala who was released last month. Sakala’s exit has left the club short of attacking options.

The club’s strikers have been struggling to score goals this season, Taboo Sembowa (3 goals), Moemedi Moatlhaping and Ronald Chikomo (2 goals each) have all been surpassed by Nyumasi who has six league goals so far.
This publication has established that Ecco had explained that Moyagoleele would have to buy him out of his contract, which has two and a half years remaining. Nyumasi has been the club’s outstanding player this season and his club is believed to be unwilling to part with their main source of goals.

Mamojadiski are currently situated in eighth position on the league table and are aiming to consolidate their spot among the top eight teams in the league. Selling a player of Nyumasi’s calibre could derail their season and they are believed to have cited that reason for their ‘not for sale’ stance.

“It is clear that Ecco do not want to let him go. They told us that the player would only be available for a hefty price and we will not do a deal with them. He was our only target in this transfer window, so we might not sign any other player but at the same time we would never rule the slightest possibility of signing anyone if our targets become available,” explained GU’s Herbert Letsebe.
In other news, the club has told this reporter that they have received early positive feedback about Jackie Mothathego’s trial at Bloemfontein Celtic. They stated that most players on trial at Celtic have been discarded except Mothathego. Thus, GU believes that the player is on course to impressing the South African club’s technical team.

The largest diamond sight this month 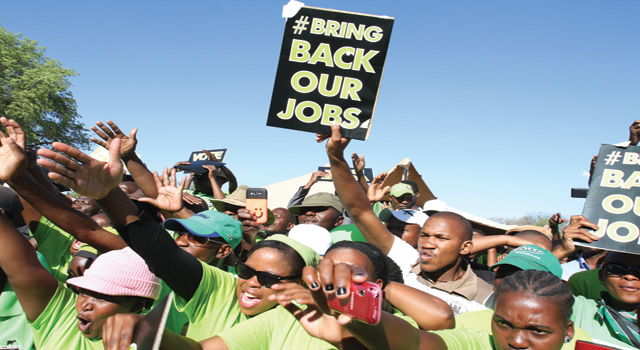