January 21, 2021 Admin
Home»Latest News»Husbands have a God given right to rule over their wives
Latest News/Letters/Opinion

“Wives, submit yourselves unto your own husbands, as unto the Lord”-Ephesians 5:22

Our Government values the dignity of women and children and guarantees full respect for human rights. That’s why Batswana enjoy freedom of movement, expression and speech. Botswana also recognizes the need to protect the family and its members, particularly women and children, from violence and threats to their personal safety and security.

Other things equal, children will have healthier and more productive lives if they are raised by both mother and father in intact families. However intimate partner violence among couples is disturbing and surely not good for our society. The existence of physical, sexual or psychological harm by current or former partner or spouses needs to be stopped immediately.

The best remedy in this difficult situation is to go back to the basics and ask God where we went wrong as a nation. Maybe we are doing things our own way instead of following directions prescribed to us by the word of God. Biblically a husband has a God given right to “tell” his wife what to do (Genesis 3:16), and she is Biblically obligated to obey him (1st Peter 3:6).
Most women today resent such an idea and REBEL against the simplest teachings of the word of God. As a result, the degree of domestic violence has increased, coupled with high divorce rates and failed marriages. This is because our women have bought into this fake feminist propaganda that misleads women into thinking that husbands who give orders are guilty of domestic abuse. So many pastors today are afraid to preach against the evils of feminism but the truth needs to be told.

A husband who tracks his wife’s time and whereabouts is considered abusive. That is a lie perpetuated by the devil. A husband has a God given right to exercise authority over his wife, and to DEMAND that she do as he says.

Women have become intolerant of their husbands’ authority in a marriage. By extension, they are also intolerant of God’s authority in their lives. God is going to judge every wife who refuses to obey her husband or demonizes her husband in an attempt to justify the sin of divorce. It is a fact that feminists and rebellious wives wont like God because God is authoritative, masculine and demands that people should do things his way. God literally says do it my way or else! God is an extremely jealous God and so is the husband.

A man should be jealous over his wife and desire to know her whereabouts at all times. In today’s immoral society a Christian husband should be concerned about who his wife associates with. A Christian husband has a right to determine his wife’s friends and say “no” if she joins a wrong group of friends who don’t respect marriage. This is what jealous husbands who love their wives do; the false idea that love equals trust is Satanic. God has ordained that man is to be the head of the household; the wife is to SUBMIT to her husband. Husbands are Biblically to rule over their wives and wives are to obey. “Wives, submit yourselves unto your own husbands, as unto the Lord”-Ephesians 5:22

Many wives today are a danger to their husband’s health because of the grief and undue stress they cause for their husbands. They contaminate and rot their marriages until there is nothing left; some even kill their babies. A husband is to love his wife and cherish her, the husband is to protect his wife, and if he doesn’t then he is breaking his marriage vows. A good wife will likely submit to a decent husband, who loves her and provides for her. Unfortunately some women can’t be pleased.

The truth is that they are angry at God, because God created women the weaker vessel (1st Peter 3:7). This is not to say that women are inferior to men, they certainly are not. Jesus said that His Father was “greater” than He (John 14:28) yet this did not make Jesus inferior in any way. There is nothing inferior about submitting to God’s ordained authority. The truth is that God created men to be strong, masculine, and decisive, but created ladies to be feminine, sweet, and lovely. Feminism aims to blur these differences. Women are to obey their husbands (not other men) to please God. It is impossible for a wife to obey God if she doesn’t obey her husband, because God commands every wife to obey her husband (1st Peter 3:6).

Unmarried women and divorcees should support married women and stop misleading them because of jealousy and competition. The same applies to unmarried men; stop destroying marriages and value marriage. To the adulterous, rapists, abusers, homosexuals and fornicators…judgement is waiting for you. In  conclusion those who still beat and harass women  and children are behind times. Le siilwe ke nako. You missed the train. Go break stones and beat trees if you have too much misplaced energy. God is going to punish you. Mosadi gaa betswe. We don’t need cowboys in this peaceful country. 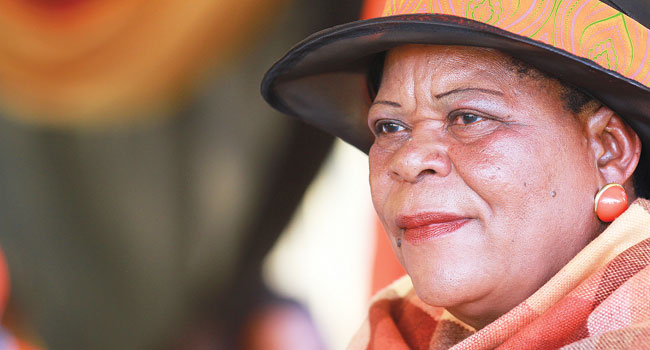