By the time you read this piece the High Court (per Rannowane J) would have delivered judgment in the Botswana Democratic Party (BDP) review case. Two other cases remain pending before the courts involving the same parties as the BDP review cases with judgment scheduled to be delivered in the interdict case before Motswagole J this Wednesday. The third case, the Marobela review case, is pending before Nthomiwa J with no definite date of argument. There can be little argument that all these matters ought to have been consolidated. They have not been. The reasons for such failure are difficult to fathom, even more so when the Chief Justice is alleged to have refused to intervene on the matter.

The possible result of that failure is that there are likely to be two conflicting decisions of the High Court. There is the possibility that the review application may succeed and the reliefs granted compel the Independent Electoral Commission (IEC) to accept Moswaane’s nomination or the Court declares that he is the BDP candidate for the Francistown West bye-election. There is also the possibility that the interdict application before Motswagole J is confirmed interdicting  either Moswaane to submit his name for nomination or the BDP to submit the former’s name or any other person for nomination for the bye-election. In the latter instance, the IEC may well ignore the Court order of Rannowane J and refuse to accept Moswaane’s nomination based on Motswagole J’s order. This they have done before. If the nomination is refused by IEC, BDP or Moswaane may move the court for contempt proceedings against IEC. The IEC defence would obviously be based on Motswagole J’s order, the question being whether or not they willfully and deliberately ignored the court order.

It seems to me that if the order of Rannowane J does not substitute the decision of the IEC by declaring  Moswaane the BDP parliamentary candidate for Francistown West bye-election, the IEC will be well advised to choose which decision to follow; so that if the Court finds the IEC decision without a basis it must substitute the IEC decision. Failure to do so will mean that the IEC is hamstrung to act when the rule nisi remains operative. The option for IEC in that case will to move an appeal. I imagine that  such an appeal can be heard without much ado. The record should not be difficult to compile in a matter of hours. If no order is made substituting the IEC decision it will be for the BDP and/or Moswaane to then move the appeal. They are the ones who stand to suffer.

In the event Moswaane is declared by the Court to be the parliamentary candidate, there is nothing that stops the nominated candidate to launch a fresh application on the question of whether or not the nomination date can be re-opened without a new writ being issued. To prove their interest in the matter they may rely on the decision of Mokama CJ in the BNF case. It is probable that the computer system may allocate this matter to none  of the three judges already presiding over these matters. There goes the Chief Justice’s Circular No. 1 of 2013, throwing the judiciary into a circus. 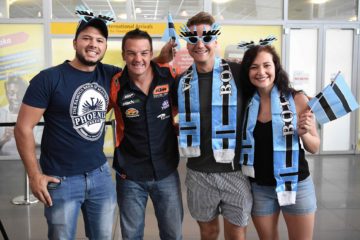