Despite Bakgatla-Ba-Kgafela Paramount Chief, Kgafela Kgafela’s attempts to have his uncle Kgosi Nyalala Pilane de-recognized as kgosi of Bakgatla in Moruleng,  the Congress of Traditional Leaders of South Africa (CONTRALESA) last week appointed him as its deputy president.
Since his relocation to South Africa last year, Kgosi Kgafela has been fighting to have Pilane de-recognized as the kgosi following reports of misuse of tribal funds. Pilane had at one stage handed a resignation letter following investigations by Kgosi Kgafela, but he later withdrew the letter.  Kgafela responded by writing to North West Premier, Thandi Modise to have Pilane’s certificate of chieftainship  practice cancelled following his first resignation letter, but to no avail. He later sought the intervention  of the courts but the case has long been dragging without any progress.

Last week, Premier Modise declared that the appointment of  Pilane to CONTRALESA should be celebrated as recognition of his invaluable contribution to the tribe. The Kgafela team has always accused Modise of favouring Pilane over Kgafela.
In her media statement, she said; “We wish to congratulate Kgosi Pilane and the leadership collective of the best executive committee elected to serve him and wish them the best in their mission to unite traditional leaders and restore the dignity of the institution of traditional leadership.”

Contacted for a comment, one member of the royal family in RSA said the election of Kgosi Pilane was a further complication  by their government. He said that this move would haunt the RSA government because should Pilane be found guilty in his corruption case, the whole world would know that a vice president of CONTRALESA was convicted for criminal charges.
CONTRALESA was launched to articulate the interests of traditional leaders and acts as an extra parliamentary opposition movement. CONTRALESA was largely set up by Moutse traditional leaders opposed to KwaNdebele independence. The movement aligned itself with the African National Congress and the United Democratic Front.

By the time CONTRALESA was launched nationally in 1989, the traditional leaders who were part of the organization had become one of the ANC’s most important rural partners. After the demise of apartheid, CONTRALESA campaigned for the constitutional recognition of the status, role, and powers of traditional leaders in the new democratic RSA. 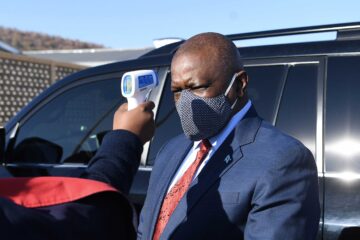