In 2015 President Ian Khama granted Tsaone Nkarabang, one of his blue-eyed boys, and private secretary, a special dispensation to host celebrations of his private wedding ceremony in the highest office in the land, The Office of the President (OP), investigations have also revelead how Khama went out of his way to foot Nkarabang’s hefty medical bills by use of public funds.

Investigations carried by The Botswana Gazette can reveal that President Ian Khama granted Tsaone Nkarabang, one of his blue-eyed boys, and private secretary, a special dispensation to host celebrations of his private wedding ceremony with his friends and colleagues in the highest office in the land, The Office of the President (OP).

Nkarabang is a highly placed individual whose personal file and its contents have preoccupied state security agents for the past four days, resulting in a controversy in which freelance journalist Sonny Serite and Abueng Sebola, Records Officer at the Office of the President, ended up jail.

Nkarabang, who rose within the public service to become Private Secretary to the President, was born and raised in Serowe. He is affectionately referred to as ‘D4’ in the presidency’s secretariat, a name derived from the fact that his salary upgrade catapulted from C3 to D4.

This publication has turned up information that, in fact, Nkarabang married his sweetheart through a special license inside the Office of the President building known as OP1, which houses President Khama, Vice President Masisi and the Cabinet Chambers. A District Commissioner, whose names are known to this publication, was requested to conduct the ceremony in these hallowed chambers, a practice hitherto unheard of.

After the ceremony, he and his wife took pictures which show them sitting with the Botswana flag between them in the Office of the President.

Nkarabang seems to be the beneficiary of an unprecedented practice of preferential treatment within the Presidency. Nkarabang has been seen representing the President at many of his charitable organizations and activities, as was the case in Khwee in 2010 for instance. It was therefore not surprising when Sunday Standard this past weekend revealed that he had exorbitant medical bills paid for him from a vote within the Office of the President, following an accident while he was on a private excursion.

Nkarabang’s preferential treatment, The Botswana Gazette has confirmed, is a common benefit for people like him who are in Khama’s inner circle.

Before he was thrust in the controversy involving Sebola and Serite, Nkarabang is said to have broken several of his ribs in a quad biking accident, an injury which resulted in him needing medical care in local and South African private hospitals at the expense of the Office of the President which was only too happy to give him a blank cheque.

The Botswana Gazette has gathered that Nkarabang was involved in the accident sometime at the beginning of 2015 when he together with President Khama and former Poverty Eradication Coordinator Olebile Gaborone had gone to donate food hampers in one remote settlement.

Gaborone and Nkarabang are reported to have been riding quad bikes when he hit a curbstone in a trough, resulting in him breaking his ribs and incurring injuries to his ears which led to him being hard of hearing and needing  the assistance of hearing aid. While it would seem the accident happened in a gazetted area and that the quad bike may be covered under the Road Traffic Act as a licensed motor vehicle entitling Nkarabang to make claims under the Motor Vehicle Accident (MVA) Fund, it is unclear if a police report of the accident was produced, or whether claims were made to MVA.

The Botswana Gazette understands that Nkarabang’s compensation could also be paid through the Worker’s Compensation Act- where his bills can be paid from funds withdrawn from the Group Accident Cover which government can claim from an insurance company to cover employees in cases of accidents or injuries.

These claims, either one or both of them, could have possibly negated the Office of the President from making an undertaking to pay Nkarabang’s bills. Even if the accident had not occurred at a gazetted area or when he was using a licensed motor vehicle, Nkarabang would have been entitled to claim under Worker’s Compensation Act, provided the accident had occurred during the course of and within the scope of his employment.

Nkarabang would not have been able to make this claim if he were frolicking on his own and not on duty.

Rankhudu had argued for the accused to be remanded in custody to allow their residences to be searched as some documents from the file were still missing, even though he was unable to say which documents were missing. The duo, represented by lawyer Martin Dingake was given bail on Monday. Their bail conditions were given “on their own cognizance” in the surety sum of P5000, and have to report to the Central Police Station fortnightly every Wednesday and are  not to interfere with state witnesses. 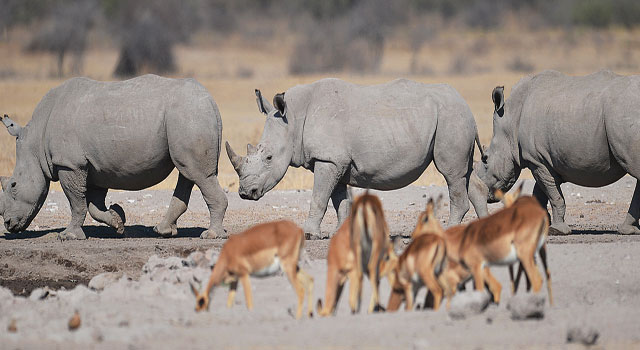