Hidden camera footage featuring famed Botswana football administrator Ishmael Bhamjee has strengthened reports of bribery in the rewarding of the rights to host the 2010 FIFA World Cup. The leaked video which Gazette Sport is in posession of  was shot by The Sunday Times reporters who posed as lobbyists in order to gain access to confidential information from Bhamjee and other FIFA representatives.

The English based publication had reporters recording Bhamjee as he revealed how Morocco was denied the opportunity to host the 2010 global event. In 2004, FIFA had set up the voting battle to include only African countries. South Africa, Egypt and Morocco were the three final countries vying for the prestigious rights to host the 2010 World Cup.

SA was announced as the outright winner of a ballot for the 2010 tournament, with 14 votes to Morocco’s 10 while Egypt failed to register a single vote. Bhamjee was part of the 24 FIFA executive committee members who took part in the elective process.

In the video, Bhamjee appears to suggest that the awarding of the 2010 World Cup rights was rigged. In the video clip, he revealed that Morocco and South Africa had both bribed CONCACAF leader Jack Warner in order to get votes from his region but SA gave him more money thus swinging things in their favour.
“After talking with everybody. Whose votes went where? We are all colleagues, you know. (Then) we found out that actually Morocco won by two votes,” he stated in the leaked video. According to Sunday Times he also added that some executive committee members could have lied about their votes.
“They gave Jack Warner a lot of money for the CONCACAF (region). A million plus dollars. At the last moment he ditched them for South Africa. A lot of people feel they (South Africa) might have given him more money than what Morocco paid,” he said.

He also revealed an incident whereby Jack Warner had mistakenly phoned him asking for the quick transaction of money he was promised. He stated that Warner had intended to call one of the South African Local Organizing Committee members and mistakenly reached him on his South African phone number.
He stated that Warner was swearing repeatedly and hung up after finding out he had contacted a wrong number.

Describing the controversial FIFA elective process
Additional footage depicted Bhamjee explaining the FIFA elective process in 2004. He stated that after each Exco member cast their votes, the attorney general, secretary general and an accountant counted the votes behind closed doors.
He suggested that the ballot papers might have been deliberately miscounted. “None of these things are counted in our presence,” he ended in the video footage.

Additional information states that FIFA was in possession of the video tapes but they are yet to take action on the matter, reports suggest that the tapes were shelved because they may expose some of FIFA’s high profile figures.

In addition to Bhamjee’s statements, FIFA whistle-blower Chuck Blazer confirmed receiving bribes for the awarding of the 2010 World Cup rights. “I and others on the FIFA executive committee agreed to accept bribes in conjunction with the selection of South Africa as the host nation for the 2010 World Cup,” he was quoted as saying. 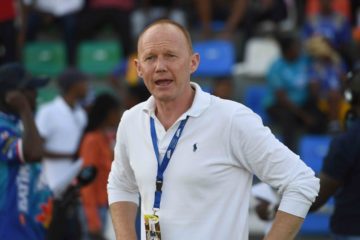