Historically, low inflation figures and interest rates gave the economy of Botswana a push in the right direction, according to E-consult’s fourth quarter economic assessment.
The economic think tank stated in the review released last week that on the macroeconomic front, “things were not that bad. Inflation ended the year at 4.1%, the lowest end-of-year rate recorded in Botswana since the measurement of inflation in 1971. Interest rates were at their lowest for 23 years. Although figures for the whole year were not available for some of the indicators, the latest data showed encouraging signs. Overall GDP growth at the end of the third quarter was a respectable 5.9%, and will probably end the year around 5%.”

According to Motswedi Securities’ weekly market highlights, the trend continued as the Rand continued to struggle; “The Pula was weaker against most of its major trading peers, however, rebounded relative to the rand”, as mining activity is expected to slow down with the threat of labour strike action.

It is however not all rosy, despite the monetary efforts of the central bank. The economic optimism expressed is yet to be reflective on local business perspective.  The Bank of Botswana’s H2 2013 Business Expectations Survey (BES), conducted between September and November, shows that overall business confidence fell from 47% in March 2013 to 45% in September. Confidence amongst exporting firms fell from 44% in H1 2013 to 38% in H2 2013, while that of non-exporting firms (i.e. those serving the domestic market) remained unchanged at 49%.

The Econsult review makes the point that the results of the survey were not exactly consistent with that of the economic data that was presently available taking into account the global economic recovery. 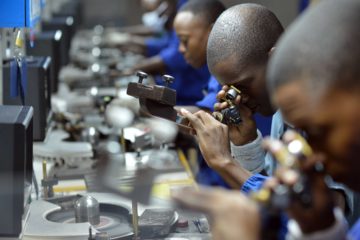