The atmosphere was charged at the Village Magistrate court last week when four men who are  alleged to have murdered an Indian businessman two weeks ago appeared for mention. Court was left in stitches by two of the accused persons who made a mockery of proceedings by continously disrupting the prosecution with questions of their own.

The four, Tebogo Matlho (24), Karabo Molefe (26) (who are currently on bail for allegedly robbing Shoppers Station mall  and Pick and Pay South Ring), Kagiso Kgangyapelo (33) and Refilwe Mosweu (24) and one other accused who was not before court are alleged to have on or around the 3rd of September at Phase 2 in Gaborone acting together and in consent murdered one Kumar Brahme Marhesh. Advancing their reasons for denying  the accused bail, the prosecution called upon the Investigating Officer Detective Inspector Malebo Kesenogile of Gaborone West Police who pleaded with the court to remand the four  into custody as investigations were still at an infancy stage. She also said cell phones which were stolen during the murder were yet to be recovered. Kesenogile further said Matlho and Molefe should be denied bail because they have other matters before Extension 2 Magistrate and one of their bail conditions was that they do not commit an offence while on bail.

The four suspects also claimed that they did not know why they were brought before court with no evidence linking them to the crime while some people who were arrested at the same time with stolen goods from the crime did not appear for mention. They further said they had admitted guilt to the Police because they had been tortured.

The  magistrate adjourned the session for 15 minutes to asses arguments and when photographers took shots of the accused persons they errupted and threatened to assault them. Police officers had to restain the accused and restore calm to the courtroom.

The four were eventually denied bail. To everyone’s surprise, Matlho and Molefe charged at the interpreter immediately after the magistrate left before the Police could restrain them again them. They continued  to insult and threaten photographers as they were escorted to the police vehicle. The accused will appear on the 4th of October and the  prosecution indicated that they will  be brought up against more charges at their next mention. 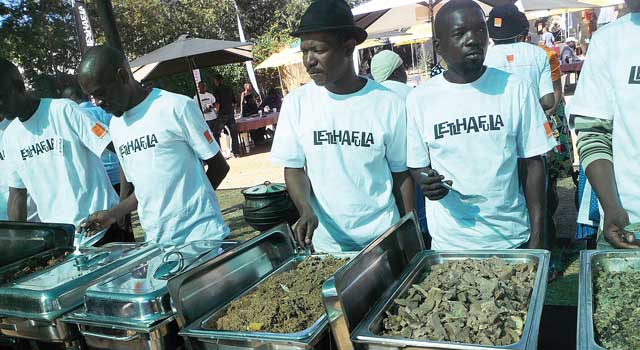