In a country where divorce is becoming less of a taboo, monogamy has become virtually unheard of thus leaving a lot to be desired of the moral fabric of our nation. “Blame evolution,” they say. Evolutionary psychologists are saying that cheating is inevitable because men are wired to lay seeds in as many women as possible to ensure their genetic survival and that is why adultery is becoming a defensible misdeed.

“You know what; there are so many ‘married bachelors’ out there it hurts. My girl friends and I – like Fanta orange to bees – seem to attract a lot of them. I don’t complain about the money and the gifts, but I wonder if their wives know what their men are doing out there. I wouldn’t dream of wrecking anybody’s home and I feel for the wives.  But for girls like me having that emergency “ATM” helps because living costs are high. I mean I don’t wake up in the morning and decide to be someone’s small house, but it is what it is. Men are just never satisfied, no matter how good they have it at home” shared *Nonofo Mothusi

Nonofo is one of the many women in our society who, at one point or the other, have been involved in an adulterous relationship. Polygamy, also known as plural marriage, is the practice of having more than one spouse. The question thus remains: does the modern day polygamist still exist in the face of economic hardships? Do men, married or otherwise still spoil “di-small house” with lavish gifts? Is the economic down turn dragging women’s judgment and morals in the same directions as our country’s Gross Domestic Product (GDP)? Is it about the money or the man?

If you answered yes to any of the above questions, then the modern day polygamist still roams the earth. The excuse is that we have to keep the human race in existence; therefore men are wired to have more than one partner. Polygamy is frowned upon by many and is even illegal in our country. But have you ever thought of the irony of this law and how it goes against our moral beliefs and expectations? The law prohibits multiple-marriage but there’s no punishment for men or women who have numerous partners and a bunch of children all over the country.

If you think about it, post-recession polygamy sort of works like the alcohol levy – even when alcohol prices are inflated people will still require the same level of satisfaction at a higher premium. This would mean an impact on other monthly budgets in order to sustain this new high cost e.g. less food, cheaper clothes etc. Batswana complain about the levy but they still get drunk every weekend. That is probably how post-recession ‘polygamists’ look at it: purchasing power could drop to an all-time zero but they will find cheaper means to get what they desire.

Mothusi age 34*, who believes that spoiling women with money and gifts represents compensation for lack of good game, explains “di small house dia tura, we all know that. But nothing will stop a man from cheating or having multiple partners if it is imprinted in his DNA and is genuinely what gives him the desired satisfaction. Post or pre-recession, financial constraints have never stopped a man from being with the females that he wants to be with. Unfaithful men never know how to weigh up their options and prioritize accordingly. That is why some families headed by men of such caliber end up drenched in debt and a life of struggle imposed on their children. What we should actually analyze is the type of women not the number, because this can change. Women usually have a preference in terms of financial status of males. There might be a paradigm shift of men getting women with lesser demands than previously, but I doubt the numbers will change. This means if a man has the resources he will be able to attract women of higher demands i.e. women who require him to splurge on fancy thousand pula gifts from time to time.  In tough economic and financial times he may have to shed off some demanding weight but remember that he still has a common habit that he has to maintain. He will then be forced to do cycles with less demanding women who would appreciate certain features such as built torso or his pretty face and don’t require much from his already dented pocket.”

Recession would mean a time of tight money. Does this mean that one would have to stop drinking the exclusive 18year old single malt whiskey and settle for a cheaper blend? Is the post-recession polygamist willing to sacrifice his brand of choice but maintain his consumption?

A  financial analyst at an insurance company in Gaborone shared,  “I married young and I am doing financially well for someone my age. I’m not sure (and I don’t want to find out) but I suspect my wife knows about the occasional girlfriends that I like to entertain but chooses to turn a blind eye because she knows she owns the most important piece of me: my heart. It is all about having respect for the two women – when I’m with my wife, I give her all the attention she needs which means I don’t take calls from the other woman. My arrangement with the other woman is sort of like a business transaction, I invest a little bit of money in whatever she wants – rent, shopping, nails etc – to make her happy, and thus I enjoy the return of investment. We both win.”

Also sharing his experience on condition of anonymity, 47 year old former member of the BDF shared: “I am a psychologist by profession so I sometimes apply some of the psychological theories to my marriage in order to avoid getting caught. My wife almost caught me out a few times before but I used some serious reverse psychology on her. Don’t get me wrong I love my wife and we are happily married, but sometimes as men we just need to add a little desert to the main course, if you know what I mean. The dessert usually comes with a price tag but hey, what kind of man would I be if I didn’t take care of my women?”

Perhaps monogamy in this era is like communism – good in theory, but a scam in reality. With the current slogan in Botswana’s fight against HIV/AIDS being kgaola chaene – meaning cut the chain of your sexual network, this would mean that the practice of monogamy does not exist. Asked why get married in the first place, he stated: “We are wired to think that we should love one person whole heartedly, but it doesn’t work like that. Naturally, we seek perfection – a little bit of this there and a little bit of that somewhere else. So basically love doesn’t make perfect sense because no one is perfect for anyone.”

The last population census revealed that there are more women than men therefore we are fully aware of the shortage of men in the country. Does the fact that many women stick to the relationship despite being aware of their husbands or boyfriends having other partners, mean that our society consents to polygamy? 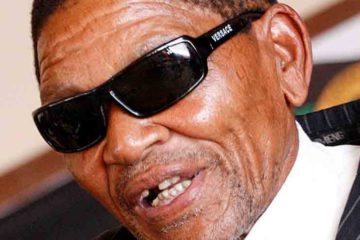