Botswana Craft brings a fun filled night for jazz enthusiasts this Friday featuring one of Africa’s music pioneers and founder of ‘Tuku Music’, Oliver Mtukudzi, alongside local jazz artists, Sheila ‘Mshilo’ Rodgers and the Stream Jazz band.
Speaking to Time Out, the events manager for Botswana Craft, Kabelo Nkhwa said this would be the fourth time that Mtukudzi will be gracing the Mascom Live Sessions event and they keep bringing him back because he has a wide fan base here in Botswana. She noted that most of the times he performs at Botswana Craft the tickets sell out. “Mtukudzi performs at Botswana Craft annually and we always bring him back because people like him and they always turn up in high numbers when he is performing,” she said.
When asked what the audience should expect this time around from the show, Nkhwa said; “Mtukudzi simply never disappoints and always puts on a great show for his mature audience. So people should expect an electrifying performance that is definitely worth their money.”
Mtukudzi has become the most recognized voice to emerge from Zimbabwe into the international scene, and has earned a devoted following across Africa and beyond.
On the local front, Jazz muso Mshilo embarked on a solo career in 2010 after parting ways with her Afro pop group Makwati. She currently sings Ikalanga jazz and she released her album titled Ndo Enda in April. Sharing a stage with Mtukudzi this Friday would be one of her biggest performance to date.

Also performing on the night is Stream Jazz, a six member outfit made up of lead guitarist Coaster Sephekolo, bass guitarist Rrapaki Mmolotsi, Thabo Motlhabaphati, Tumelo Mafoko who plays the keyboard, and synthesizer and pianist Kagisanyo ‘Cooler’ Disang. The band was formed in 2007 and have an album titled Tsa Lefatshe which was released in 2011.
The Friday show is expected to kick off at 8p.m and tickets cost P250 in advance.

BackBenchers shut Tsogwane out of Meeting with Masisi 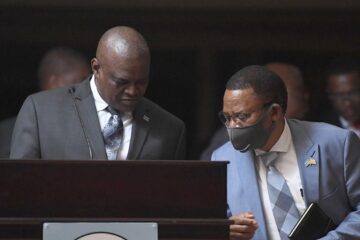