Those who follow Manchester United would know that the world’s fastest man Usain Bolt wanted to play for the club. It was a dream; a fantasy. Bolt may be able to dribble but a football contract at Old Trafford requires more than that. He has since reconciled himself to the fact that his life depends on athletics, a gift God favored him with.

I have been informed that Nigel Amos is the biggest Dj in some place near Francistown. Personally I am a big Dj Sbu fan, not only because he’s a talented Dj but because he inspires many youth with his ability to rise from being an ordinary man to being special, and accumulated phenomenal wealth in the process. Dj Fresh is another dj who has also intrigued many of us. There is absolutely nothing wrong with one being a dj; professional dj’s like the two I have mentioned make lots of money.

However, my fear is that Amos is fast losing interest in athletics and I doubt if he is talented enough to become a dj. I do not think Amos wants to be like Dj Fresh but I believe he wants to be like Usain Bolt. He has already displayed his talent at the highest level and with Batswana in full support.

He has tasted a bit of success, a bit of fame and lots of money. He still has more opportunities to dazzle us at the highest level and also make lots of money. Amos has the opportunity to rub shoulders with Usain Bolt and even make a name for himself and his family. The point is there is a reason why Amos is now a club dj at some corner bar and why he is always in the papers for the wrong reasons. He may just be in a crisis. As a young person with money, he is susceptible to indiscretions, he is in a dilemma. Money, fame, sex and alcohol have confused and disorganized many people including political leaders, movie stars, musicians and sportsmen. He is not abnormal and is certainly not alone. Amos needs guidance; he is young and may just be falling apart. He cannot believe what he has got already and where he is in such a short period of time. Strangers and hangers-on now have an opportunity to deplete his pockets. It could be possible that they have cleaned his accounts already.

Jabu Pule mentions this crisis of having everything in a short time in his new documentary. According to Pule, having fast cars, expensive clothes, alcohol, a nation of women, a squad of friends around him when at the top makes one not to think properly- the money runs out fast, and your job becomes boring.

Amos needs smart men and women around him. He does not need people who will come and milk him dry. He needs an honest manager who is interested in his life, his career and his future and life beyond athletics. He needs a committed government and a serious sports council, a corrupt free Athletics Association and a caring, sympathetic nation behind him. Mike Tyson tells us he blew $300 million in his career because of many friends, drugs sex and liquor. He says there was no structure in his upbringing. He was simply a deeply divided man. The money ran out and the friends ran away.

Thus, those who purport to look after our athletics stars should bring Amos to his senses and discuss his future and the circumstances in which he finds himself in. We need to know who manages him and his schedule. He has to be away to study while he is still doing athletics. He is not a private individual anymore; he chose public life, and whatever he does whether in the field or as a dj is in the public eye.
Amos needs urgent help before he embarrasses himself, the world, his family and the honorable sport of athletics. 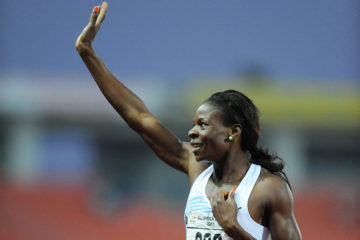