No economic shake up in the 2nd quarter of 2014

The second year quarter did not contain any significant economic surprises or developments and was largely business as usual. Three E-consult think tanks, Dr Keith Jefferies, Bogolo Kenewendo and Thapelo Neorami, state this in the 2014 second quarter economic review report.

The report released last Friday indicated that economic growth figures for the year to March 2014 showed annual Gross Domestic Product (GDP) growth of 5.9 percent, a respectable figure and largely unchanged from December 2013. “Growth was largely driven by increased diamond production, although on a less positive note, the growth of the non-mining private sector slowed further. “Other somewhat troubling developments reported on during the second quarter were a sharp slowdown in exports resulting in a balance of trade deficit, and a jump in non-performing loans in the banking sector” the report reads.

“These trends are encouraging as there has been a concern about high levels of unsecured household debt and slow growth in business credit. The increase in arrears on credit to firms is alarming as it indicates a further deterioration in business conditions.”

Despite the low current business confidence according to Econsult, an overwhelming 64 percent and 68 percent of local firms are optimistic about business condition in 6 to 12 months time respectively.

The International Monetary Fund (IMF) recently praised the country’s good economic growth performance over the years. However, it drew attention to deteriorating underlying growth trend, with the prospect of lower growth rates going forward, due to the declining growth of total factor productivity.

A number of risks were identified in the report highlighting short to medium term issues that need to be monitored. In the financial sector report raised concerns about rapid growth rate of household credit, and raising arrears on the bank lending, although at a low base. The Econsult however appreciated the showdown in the household credit growth, but a very disturbing spike in non-performing loans (NPLs ) to the private business sector.

Econsult had in the first quarter report pointed out that government spending on wages and salaries has continued to rise steadily, despite minimal formal salary increases and restrictions on hiring.
Furthermore, inflation increased slightly during Q2 of 2014 from 4.4 percent in March to 4.6 percent in June. The inflationary pressures, they said remain high with the main drivers being tax increases particularly on alcohol and prices of non-tradables like health and education. Barring shocks from fuel prices, Econsult economists anticipate inflation to increase marginally and end the year at about 5 percent before falling back in the first half of 2015.

Foreign Exchange Reserves also both in pula and dollar terms increased by 3.4 percent to P70.1 billion and US$ 7.99billion. International fuel prices increased during Q2 and in mid June reached almost their highest ever level in pula value before dropping back slightly.

Following four quarters of trade surpluses in 2013, Botswana slipped back into a trade deficit in Q1 2014. The P1.4billion deficit is largely attributable to a large drop in exports than imports in Q1. Exports are said to have contracted by 32.9percent between Q3 of 2013 and Q1 of 2014 while imports contracted by 16.6 percent during the same period.

Berry Heart to perfom at Story Moja Festival in Kenya

No economic shake up in the 2nd quarter of 2014 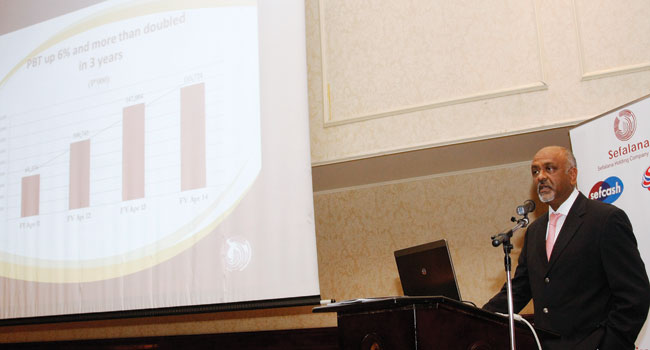