It was a no show for the  Attorney General  Chambers (AG)   in a  case in which local newspaper, The Botswnaa Gazette is challenging the  Directorate of Corruption and Economic Crime (DCEC)  for search warrants  used by the  directorate to raid the publication sometime in May this year.

Asking the  Lobatse High Court Judge Michael Leburu  for postponement , the applicant’s attorney Carlos Salbany said the AG took lightly the case and  that the  lawyers should also be held in contempt of court. “ We express outmost displeasure at how the AG’s have handled the matter which has significant constitutional implications. Not only did they file their answering affidavits three weeks after our last session but they have also failed to turn up,” Salbany said.  According to Salbany, he learnt while at court that  AG’s attorney,  Motsioeme  Taunyane  was  no longer handling the case and it has since been  handed one Rammidi. Judge Leburu said both the AG attorneys should show cause why they should not be held in contempt of court. The matter was rescheduled to the 15th October  2015.

At the center of the case is the search warrants which were produced by the DCEC officials when they  raided The Botswana Gazette premises following a story the paper had published. The publication is of the view that it was improper for the DCEC to have engaged the Attorney General Chambers and the Attorney General  in the proceedings as DCEC has prosecutorial functions and should be represented by Directorate of Public Prosecutions (DPP). According to the publication, the DPP is a  completely  autonomous department. The AG has a different view, that DPP is a department within it.  Furthermore, the publication believes that  by AG representing the DCEC and the Broadhurst Magistrate Court ( which issued the search warrant) , it is violating the publication’s rights to a fair and partial  hearing at the court and is  usurping the power of Section 51(a) of the Constitution.

In his founding affidavit,   the publication’s Managing Editor, Rudolf Olsen  stated that the State Proceedings Act  does not apply in the proceedings of the matter as AG is mandated to act on behalf of government and officers  but not as them  ,  and that he avers that the AG acts in civil matters in which government department  or official is being sued personally on a criminal claim.

“I aver that only the Director of Public Prosecution can delineate the administrative policing powers of the DCEC, not the Attorney General,” he said, adding that it is only the DPP and its officers that are  responsible for criminal justice. He said the warrants (to enter and search) used by the DCEC can only  arise pursuant to criminal proceedings as was the case in the matter of the publication.

In her answering affidavit, DCEC Director  Rose Seretse denied criminal proceedings against the applicant, saying the respondents were in fact empowered by the DCEC Act to search the applicant’s premises.  On the issue of why the AG’s was representing the DCEC, Seretse said all government organs are equal and are equally entitled to representation by the AG.

DCEC officials presented ‘enter and search’ warrant  to the  The Botswana Gazette following a story  published  on alleged  dealings  to supply oil to Botswana. Those implicated in the story were one deported  Jerry Chitube,   former Botswana Democratic Party (BDP) Member of Parliament and current Southern District Council chairperson,  Mephato Reatile  and  Director at Ministry of  Energy,  Ezekiel Moumakwa. The deal, had it gone through, could have been valued at around P150 million.

According to the DCEC officials, the matter was still under investigation and having published the story was in contravention of Section 44 of the Corruption and Economic Crime Act (CECA) which prohibits disclosure of information on an ongoing case. 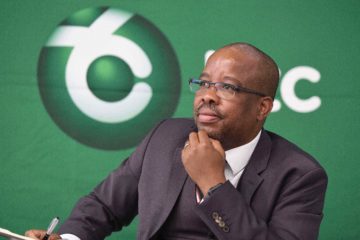