The Auditor General has raised concerns over the failure by the Department of Wildlife and National Parks (DWNP) to provide ‘‘a satisfactory explanation for the rationale’’ behind the transfer of P806 507 from Government Special Funds vote as payment for the design and production of the elephant sculpture at the Sir Seretse Khama International Airport- despite the fact it was paid for after its unveiling by President Ian Khama in July 2015.
In her report for the financial year ended 31st March 2016, Auditor General Pulane Letebele revealed that an amount of P665 000 was initially paid to the artists who designed and constructed the elephant sculpture at the Sir Seretse Khama International Airport, plus P336 233 for the glass enclosure. She therefore questioned what the additional P806 507 was for, raising concern over the department’s failure to provide satisfactory answer. The funds for the erection of the iconic sculpture, which is said to be President Ian Khama’s brainchild, were sourced from the Conservation Trust Fund under the Special Funds vote. Government commissioned Thapong Visual Arts Centre to find artists who could craft the elephant sculpture whose ivory tusks weigh 2.7 tonnes.
Local artists, Isaac Chibua, Wailer Motsu, Kelebogile Marope, Gosego Motlogelwa, Kealeboga Ramogotsi, Galositse Metlhaleng and Joseph Piet made the collaboration of artists who designed the monumental piece of art which has become the centre of attraction at the airport in Gaborone. The sculpture was made from ivory collected from elephants that died from natural causes.  “It is intended to raise our collective consciousness about the plight facing the African elephant today,” President Khama said during its unveiling ceremony two years ago. He said the unveiling of the sculpture was a part of conservation efforts made to avert illegal trading of ivory. Khama said the sculpture served as a reminder to all who pass through Sir Seretse Khama International Airport that conservation of elephants was a collective responsibility. 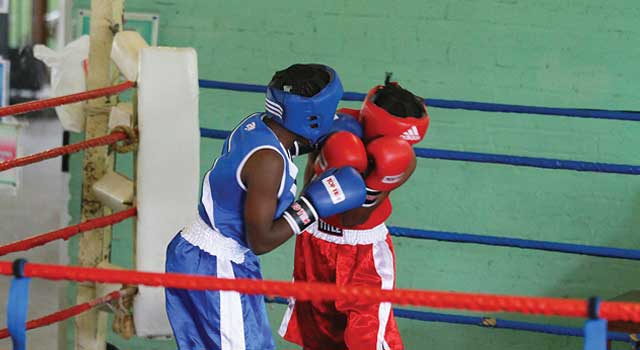