Economists have drilled into modern economies the belief that economic growth leads to jobs.  It however appears this notion lost  credence when world economies experienced dramatic shifts in their economic fortunes. The previously strong link between growth and jobs is progressively weakening. Botswana demonstrated a reputable track record of economic progression in the days before the economic downturn but it is observed  that the historic  growth did not move at the same pace as job creation;  jobs remained well below the growth rate.

This observation gives impetus to the view that the 2008/2009 economic crunch exacerbated the mismatched pace that had gradually deepened suggesting that it was not the direct cause for lagging jobs. The reality is that during the economic meltdown the economy shrank and the few jobs that were already there were eroded. Perhaps what ought to be raised as a concern in the post-recession years is that a jobless recovery continues to be the growing trend.

A single, explicit National Job Creation Strategy
Seretse suggested that a detailed and clearly stated strategy must be developed by means of a coordinated and solid effort between all government departments, private companies and citizens so as to direct and infuse their day to day business activities with the synergized framework. He anticipates that the uniformed plan of action will among other things do away with regulatory bottlenecks that stifle job creation.

Adopt a national community cooperative model
He also asserted that the cooperatives model must be adopted as the new job creation blueprint mainly because it holds the opportunity to bring about a large scale impact through the active involvement of people in their own development. He added that the model will make it possible to tap far down into government procurement emphasizing that its accomplishment will largely be driven by the support of relevant and competent officials who can manage, adjudicate and award tenders.

Deliberate creation of indigenous financial institutions
Seretse pointed to the alarming number of foreign owned investment banks and asset management firms which as a result makes Botswana miss on the golden opportunity of the ownership of businesses by locals as well oiling the machinery of national projects. He warned that the effort must not be seen as protectionism but rather an instrument that will sustainably create meaningful and gainful jobs. He therefore described the existing dominance of foreign owned entities as a financial security threat.

Seretse articulated the ideas, cognizant of the prevailing challenges “Botswana is defined as a middle income country yet most of its people live in conditions typical of a low-income country. This suggests that our greatest problem is not that we do not have enough money, but that we have not found effective, sustainable and just ways of distributing it,” he said.
Lynette Ntuli, Chief Executive of Innate Investment Solutions, added to the discussion with a focus on the link between infrastructural and enterprise development. Innate Investment Solutions is a South African based professional services group that offers physical asset management and infrastructural solutions. “After the words investment and emerging, the next most used word in relation to Africa is infrastructure. From roads to energy, water and rail, social infrastructure such as health care and educational facilities -Africa has never been in more demand or more challenged by the shortages, requirements for design and capacity for infrastructure,” she said.

Ntuli brought to the attention of the audience the imbalance in the sense of urgency that exists between large scale infrastructure and business. She expressed that the two can exist at a distance but they however cannot develop in isolation thus stressing that a meeting point is required so as to induce growth. She said, “Business cannot create without power, logistics networks or even ICT and a platform and simultaneously infrastructure without an end user.”

“So how do we merge the interests of enterprise and infrastructure to create not just jobs, but a skilled workforce that has the capacity to catalyze infrastructure and economic growth in the region,” she asked. Ntuli said in order to achieve that, government and enterprise must draw nearer to each other so as to harness robust and symbiotic relationships as well as a solid plan of action to propel growth. The result, she said, will be focused and deliberate actions, delivery of responsive programmes due to acute understanding of the reality on the ground and measurable success by means of piloting interventions. 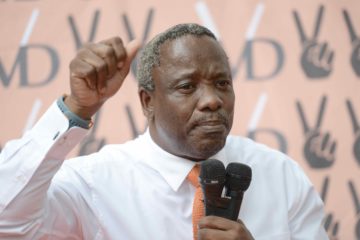