Ntesang Simanyana’s proposed move to Gaborone United has taken a turn for the worst due to Polokwane City’s refusal to release him. The transfer was expected to be completed before the end of last month’s transfer window but GU have stated that their South African counterparts halted the move  and the case has since  been referred to the South African Football Association (SAFA).

GU consulted the Botswana Football Association (BFA) before reporting the matter to SAFA, and the latter will arbitrate the case and possibly end the transfer saga. GU officials told Gazette Sport that they were puzzled by Polokwane’s last minute refusal to sell the player despite having agreed on a fee with the club. Polokwane City are refusing to issue the player’s International Transfer Certificate (ITC).

They revealed that both clubs were set to conclude the deal days before the transfer deadline; the final stage was for Moyagoleele to deposit the transfer fee to Polokwane City’s account which the Reds have since refused to disclose. However, reports state that the transfer fee is estimated around R200 000.  According to the local club, the Premier Soccer League (PSL) club’s officials then started ignoring GU’s attempts to sign the midfielder.

“We made a move for Simanyana long before the transfer deadline day and we were confident of reaching a conclusion but they started blanking us; we have not heard from them in a while. We were supposed to transfer the money into their account to finish the deal but they have not been cooperative. They are refusing to release him. We have sought the intervention of SAFA and we hope they will sort out the situation soon,” said GU’s secretary general, Herbert Letsebe.

Information reaching Gazette Sport states that Polokwane City still owes the player his signing on fee that he was  supposed to have received shortly after his transfer in July last year. Additional information from a source revealed that the player was neglected when he was injured earlier this season resulting in the player reportedly paying for his medical bills.
Meanwhile, Simanyana made only one competitive appearance for the club this season. The arrival of Bobbie Solomons midway through the season hindered his progress as the new coach informed the player that he did not fit into his plans. The former Township Rollers midfielder is currently training with GU while awaiting the conclusion of the transfer saga. 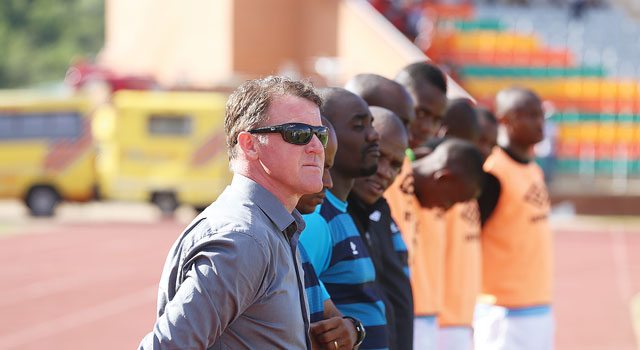