A decision emanating from a Presidential Directive by President Ian Khama and his cabinet to dissolve the Botswana National Youth Council (BNYC) has opened a can of worms with labour laws contravened and his executive powers challenged in the process.

According to a letter from the retiring Ministry of Youth Permanent Secretary Lewis Malikongwa to the BNYC board, the Presidential Directive Cab 10(B) of 2015 ordered the Minister to appoint a new board and the chairperson. Old organs and structures of the BNYC will be replaced by organs created through the presidential directive. The letter further states that the new BNYC will not hold any asset nor have any employees.

The transformation of BNYC has however led to a legal battle that will test President Khama’s executive powers in regard to dissolving the board of the council. So far two labour cases have been lost by BNYC at taxpayers’ expense- as courts found that the organization had contravened labour laws during the restructuring of the council. In these cases BNYC will lose close to P2 million. One of the cases is that of former BNYC Social Unit Manager Veronicah Chube who was rewarded close to P1 million in a case where she was unlawfully dismissed. Her lawsuit was followed by Goitse Mpolokang and Tibapi Gutcha who successfully sued for about P1.2 million for unlawful dismissal. At the centre of the dismissal of this trio was the presidential directive in question.

As if that is not enough, 33 employees are suing BNYC for unlawful retrenchment. During the restructuring, 33 individuals were laid off and will take the organization to court. Another case emerging because of the directive is the matter of seven former BNYC board members who are challenging the powers of the executive in regard to dissolving the board. The seven  are represented by Gaborone-based lawyer Uyapo Ndadi. The BNYC, Ministry of Youth Permanent Secretary Lewis Malikongwa,Minister Thapelo Olopeng, President Khama and the Attorney General are respondents while the seven former board members are applicants. The case has been dragging since the judge responsible, Justice Letsididi, was suspended in August. The matter will be re-argued before Justice Dube at Lobatse High Court on 10 February, 2016. It would be yet another blow if the court reverses Khama’s decision to appoint 11 board members last month.
The Constitutionality of Presidential Directive Cab 10(B) of 2015

A lawyer representing the 33 former BNYC employees who are suing the organization for laying them off, Anthony Morima, says the Council is a universitas persona (independent body); Meaning that it was not established by a presidential directive as it existed before 1974: “The Presidential Directive merely approved BNYC’s existence, it did not establish BNYC. Therefore a Presidential Directive cannot dissolve the organization,” he said.

When representing the seven ousted board members, Ndadi wrote in court papers that the Council had its own constitution that it abides by and could not be controlled by a presidential directive, “The respondents do not contend that the BNYC has statutes governing them, but however contend that the executive has powers to dissolve, restructure and abolish the BNYC because it was created by the Government through a Presidential Directive and that the BNYC is under the Ministry of Youth, Sport and Culture.”

On the contrary, the lawyer representing BNYC, Joseph Akoonyatse, says “the President has the executive power to dissolve the BNYC.” According to him, the office that created the BNYC now says it wants a different BNYC,  “The President can even wake up tomorrow and decide, on whatever merit, that he wants to dissolve the Botswana Housing Corporation, for example,” argued Akoonyatse.

Representing President Khama, Boineelo Mosweu of the Attorney Generals Chambers, said a decision from a presidential directive could not be interdicted. According to Mosweu, the seven board members failed to demonstrate, reasonably, how they would be affected by the whole exercise of dissolution.
What will become BNYC

Morima says because of the recent dissolution of BNYC, the Council will now be dependent on government and will act as a “desk” at the Ministry of Youth. This will however alienate BNYC from international NGOs as they do not associate with organizations that depend on their governments, according to the lawyer. Morima says the Commonwealth principles are that youth councils should be independent. He says most international NGOs will stop funding BNYC because it is now a government agency.

In her letter to BNYC board members five months ago, Youth Ministry Permanent Secretary Malikongwa suggested that there would be new organs created and the Ministry would do away with old organs, meaning that the BNYC would now be under the Ministry of Youth. Information reaching this publication suggests that there will be a separation which will facilitate the dissolution of Sechaba Youth Enterprise Company and the National Youth Development Trust. The Gaborone Multipurpose Youth Centre will be closed down while all movable assets will be handed to the Ministry.

In his affidavit in the case against seven board members, Minister Thapelo Olopeng said BNYC had not been dissolved as a matter of fact. He said government concerned itself with dissolution of existing organs of BNYC, and replaced them with organs spelt by guidelines to Presidential Directive Cab 10 (B) 2015:“It was the same way the Council was created that it was now restructured. This is an Executive power which the President is empowered to exercise without the advice of anybody,” he said.

While BDP Youth Wing leader Andy Boatile said he was happy with government’s decision to take control of the BNYC as it had “too much independence.”
Boatile argues that it is the Youth Ministry’s responsibility to intervene when things are not done properly in the organization. He disagrees that the new board will serve the political interest of the ruling party, saying he does not know the 11 new board members and their political affiliation.

BCP Youth League President, Tumiso Rakgare however says BNYC has always been BDP’s political project giving the examples of Fidelis Molao and Phillip Makgalemele who emerged through it, including staunch BDP members like Benjamin Raletsatsi and Lous Sibanda: “Metlha Mokwena who was once the BNYC Chairperson contested for BDP Deputy Secretary General and lost to Shaw Kgathi in Mmadinare Congress. Even this new board was created by BDP and I doubt it will work because it is going to lack creativity and independence,” he argued.

Rakgare adds that of the new board members, Gobe Taziba is a known BDP member who was once an SRC president at the University of Botswana leading the party’s student movement, GS26: “BNYC will serve the interest of BDP as has always been the case,” he said vehemently.

What should be done?
Lawyer Morima says to avoid costs in litigation, BNYC should extend  an olive branch to its former employees and negotiate issues out of court. Morima warned that if this issue is not handled with care, there will be more cases brought forward and the BNYC will lose millions.
Last month Francistown East MP Buti Billy urged Minister Olopeng to intervene urgently and solve the issue to avoid mushrooming litigations against the BNYC or his ministry. Billy is worried that the dissolution of BNYC has affected youth unemployment as many young people lost jobs when it was completely changed.

NO SIGN OF CITIZEN EMPOWERMENT ACT IN JULY PARLIAMENT 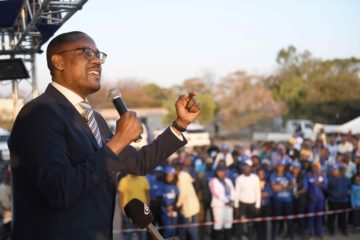