Adjudicates over a secret British close family friend’s matter without disclosing
• Friend’s company helped set up Kirby’s offshore investments
• Friend’s firm also handled Kirby’s late son Puso’s plot sale by his estate
• Kirby unapologetic, says ours is a ‘close society’
In the wake of his criticism over Panama Papers revelations, Court of Appeal (CoA) Justice Ian Stuart Kirby, a specialist tax attorney during his time in private practice, went public to deny any wrong doing and possible conflict of interests regarding his off-shore investments handled by discredited law firm Mossack Fonseca. It has however emerged that Kirby adjudicated, without disclosing to litigating parties, a matter involving a family friend and a man who owns a stake in the law firm that set up his controversial investments in the British Virgin Islands, Tefo Pheage reports.

A Kirby family friend, Charles William Stocker (48) who holds a Bachelor’s Degree in Property Investment and Development owns a company called Stocker Fleetwood Bird which Kirby concedes “handled the sale of his son Puso’s plot by his Estate”. Stocker is a long-time acquaintance of Puso who died in 2010 and the judge’s daughter, Liv, who currently lives in the USA.

This publication is informed that Kirby was also a close friend of Charles William’s father- Stocker Senior, a view he firmly disputes saying despite stronger relations with the son, he never knew or met his father.

“William Stocker was a friend of our late son Puso and of our daughter Liv, who lives in USA. His firm Stocker Fleetwood Bird handled the sale of Puso’s plot by his Estate. Other than that, I do not recall any dealings with him or his firm. Puso died eight years ago, since then we have not interacted with William. He is of a different generation,” Kirby said.

While Kirby says he has never interacted with William since his son’s plot sale, litigants in court proceedings are protected from a perception of possible bias, a protection that becomes meaningless when a judge’s business interests are unknown. The younger Stocker is a co-owner of Pam Golding, a company which used Mossack Fonseca to set up “seven offshore companies domiciled and registered in the tax haven of the British Virgin Islands” on behalf of Kirby, according to a recent report on documents detailing the dealings of the questionable law firm. The seven companies were formed to “buy‚ develop and later sell one property each in the United Kingdom” and “they were special purpose vehicles set up by a real estate agent active in Botswana‚ Pam Golding Properties,” according to Kirby.

Leaked Mossack Fonseca communication shows that Kirby has already sold his shares in four of the seven entities, remaining a shareholder in three companies: Jaye Limited, Beachleigh Holdings Limited and Allmonde Company Ltd.  The Panama Papers shine a light on a dark and corrupt corner of global capitalism, where high-profile world leaders and prominent personalities are able to conduct secret financial dealings away from public scrutiny.

Asked if he knew about Stocker’s businesses, Kirby said he did not and that they were not acquaintances.“As I have previously explained, several years ago, I (and others) made some rather unsuccessful investments at the invitation of a Mr. Arderne who came to Gaborone. He was representing what was said to be a joint venture between Pam Golding International and Athanor Properties, neither of which I had heard of before. I have not had any dealings with either company since,” he responded.

For his part, William Stocker told this publication that he knew the Kirby family but said he would not discuss issues emanating from their “personal” relationship. Pressed further he said neither Pam Golding nor Stocker Fleetwood Bird had ever dealt with the family on any business grounds, contradicting Kirby’s statement that Stocker Fleetwood Bird handled a sale on behalf his late son.

“We have never conducted business for the Kirbys, in fact we have sent correspondences to the SA headquarters enquiring about the said company’s involvement in the alleged setting up of Kirby’s offshore investments following the alleged leak. We have been assured that it was not true,” Stocker insisted.

His statement seems to affirm the words of Pam Golding Property Chief Executive, Dr Andrew Golding who at the time of Panama Papers revelations said their company was not in the business of setting up offshore companies to buy, develop and sell property. He told the South African publication Business Day that the only business they do involves the facilitation of the sale of a property between a buyer and seller only as agents.

The African Network of Centres for Investigative Reporting (ANCIR) raised concerns that as a judge none of “the names of his fellow investors are publicly known” and that as a result litigants could be prejudiced, “If this information were to be publicly known‚ it would assist litigants to determine potential conflicts of interests arising from Kirby’s commercial dealings‚” ANCIR said.

“The judiciary’s interests are in the public domain and a strong argument exists that this transparency enhances the credibility of the legal system,” it added.

It is a principle in the legal fraternity that a judge shall disqualify himself in any proceeding in which his impartiality might reasonably be questioned by a litigant and such the case be transferred to another judge. At times justices or judges will recuse themselves on their own motion, recognizing that facts leading to their disqualification are present.

Asked whether he did not see the need to recuse himself from a family friend and business associate’s case, Kirby, who tried by all means to portray himself as the epitome of judicial uprightness, did not make any disclosure of his previous engagements with Stocker.

“I have handled many hundreds of cases over the years, many involving companies and individuals that I may have come into contact with in the 48 years I have lived in Botswana. This is inevitable in a close society like our own. I do not particularly recall the case you refer to but certainly I had no relationship with William Stocker or his company which could have led to my recusing myself from such a case,” Kirby said in his defence. Legal pundits argue that the “closeness” of a society does not defeat the perception of the bias test, nor is it a legal consideration on which recusal can be refused.

The multimillion Stocker-Fleetwood case under Kirby

Kirby has adjudicated a case in which Olebeng Ngwakwena  was suing the National Development Bank (NDB) and Stocker’s firm, Stocker Fleetwood Bird even though he did not disclosing the close relationship with the latter.

Ngwakwena’s lawyer, Patrick Matlho of Matlho Attorneys and his client obtained a default judgment for multimillion pula damages on 17th December 2008 since the defendants had not entered appearance to defend.

Attorney Mmusi Kgafela initially acted for 1st Defendant-NDB but only filed Notice of Assumption of Agency on behalf of 2nd Defendant-Stocker Fleetwood-Bird on the 20th November 2009.

Kgafela who initially acted for NDB was granted leave to file defence documents on its on the 5th November 2009 but he failed to observe set timelines, according to sources within the courts. At all this time, the 2nd Defendant- Stocker Fleetwood-Bird did nothing although had been served with court documents, the sources explained.

“Kgafela only decided to file rescission application of default judgment granted on the 17th  December 2009, more than a year later and Justice Kirby granted the order on the 23rd  April 2010,” another source disclosed.

The judicial code of conduct states that “a judicial officer must disqualify himself/herself in any case in which he/she believes he/she will be unable to adjudicate impartially”. The legal right to a fair and impartial hearing is constitutionally enshrined in favour of those appearing before a court. The provision is not intended to protect a court and the presiding officer.

The code of conduct does not seek to set out all the examples in which judges ought to recuse themselves though it does seek to lays a basic foundation of the principle in that “a judicial officer must disqualify himself/herself in any case in which he/she believes that a reasonable, fair minded and informed person, would have a reasoned suspicion of conflict between a judicial officer’s personal interest or that of a judicial officer’s immediate family (being a spouse, child, grandchild, parent, grand parent, great grandparent, sibling, uncle, aunt, niece or nephew or any person living in the same household as a family member of the judicial officer).”

Ian Kirby is also an alleged close associate of President Ian Khama, who at the time of the Panama Papers took no action against the judge who magnanimously indicated that he would resign if called upon to do so. Founders of Mossack Fonseca, the law firm at the centre of the Panama Papers scandal, were arrested in Panama City in February as the country’s attorney general launched a probe into their alleged connections with a corruption scandal in Brazil that involved the use of tax haven to hide dubious dealings. 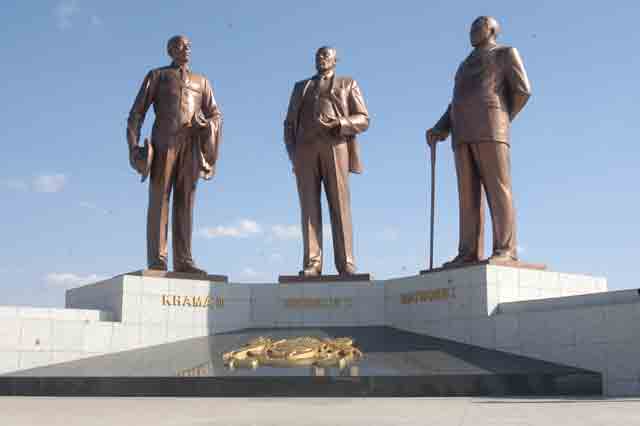