When investigators from the Directorate on Corruption and Economic Crime (DCEC) summoned the Director General of Directorate of Intelligence and Security (DIS) Isaac Kgosi in February 2012, and subjected him to a gruelling marathon interrogation, their concern was Kgosi’s flamboyant lifestyle that did not auger well with his known sources of income. At the centre of DCEC’s concerns, was a company known as Silver Shadows, Kgosi’s private company.  Incorporated in 2009, with Kgosi as the sole shareholder, it appears that this company is nothing more than brief case company. However, in 2011, the company acquired from Choppies Enterprises Pty Ltd 3, 999,990 shares at a purchase price of P3, 999,990.

Giving evidence before the Public Account Committee (PAC) recently, DCEC Director, Rose Seretse decried the rampant corruption that in the public service. One form of such corruption, the director revealed, is public officers who live beyond their known and usual sources of income.

The  Corruption and Economic Crime Act makes it a criminal offence for one to maintain a standard of living above that which is commensurate with his or her present or past known sources of income or assets. Sources within DIS reveal that during the course of his interrogation, Kgosi portrayed himself as a Motswana tribesman of very humble possessions.

The focus of DCEC investigations centred upon Kgosi’s company, Silver Shadows. What particularly baffled the DCEC investigators was how this supposed brief case company got to hold P4 Million worth of Choppies Shares. Records obtained from Registrar of Companies provide credence of Silver Shadows’ acquisition of 3, 999,990 ordinary shares in June 2011,  at a cost equalling in Pula the number of these shares. However, records reflect the names of an individual known only as Tshenolo Kgosi, printed in brackets under Silver Shadows in the column reserved for shareholders’ names.

One of the aspects of this case that The Botswana Gazette sought to establish during its investigations has been to find out who Tshenolo Kgosi is and the relationship this individual has with Silver Shadows. The company records do not reflect him/her as a shareholder or director of Silver Shadows. These records, obtained by this publication as early as mid this month, state that the company has one share holder, Isaac Seabelo Kgosi, the DIS Director, who is also the company director together with certain Tau Tsholofelo and Ntshinogang Samantha. The identity number of Isaac Kgosi is provided in these records. The company records however do not make any reference to Tshenolo Kgosi neither as shareholder nor director of Silver Shadows. The question begging for an answer is why then should Tshenolo Kgosi be reflected as jointly holding the substantial number of shares in Choppies with Silver Shadows or be associated at all with the latter company. Who is this individual? What is his or her vocation and sources of livelihood, to enable him/her to purchase this huge number of shares; and on what account should he or she be associated with Kgosi’s company?

Investigations have been made difficult by the fact that apart from mentioning Tshenolo Kgosi in the share records of Choppies, he/she remains faceless in that his/her particulars are not provided in the official records. The Botswana Telecommunications Corporation phone book for the year 2014 lists a telephone number against the name of a Tshenolo Kgosi. When the number was called, the phone rang unanswered.

Silver Shadows, it would appear, does not even have a physical office and reflected in the Registrar of Companies records is the  physical and postal address of Corporate Services Pty Ltd, its secretaries. A legal expert interviewed by this publication was equally baffled when shown the shareholding records of Silver Shadows which bear the name of Tshenolo Kgosi, inserted in brackets under that of Silver Shadows as the holder of the astronomical number of shares in the company.

“In legal terms, a company is regarded as a distinct and separate legal personality to its directors and shareholders. It does not make sense to me that the name of Tshenolo Kgosi is inserted in brackets under the name of Silver Shadows as a shareholder. The insertion of the name of this individual is potentially misleading; for wittingly or unwittingly, it points in the direction of this individual as having some form of association, either as a major shareholder or director, with this company when, according to available records, this is not so.” opines the lawyer.

Attempts to contact Isaac Kgosi have been futile.  It is also unclear whether Isaac Kgosi, a public officer, has made a declaration of interest to the Permanent Secretary to the President (PSP) regarding his interest in Silver Shadows. At the time of going to press efforts to contact Eric Molale, the PSP were futile.

As the unfolding story and intrigue surrounding the investigations on the DIS boss by the country’s anti-corruption unit, unfolds, DCEC Director, Seretse, is yet to give a response to the petition made by the BNF leader Duma Boko, in which he sought answers on the steps taken by her unit following the high profile investigations. 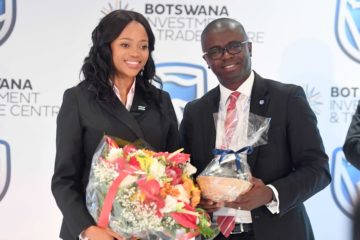