MMADINARE: Botswana Democratic Party (BDP) veteran politician, Daniel Kwelagobe, shocked many over the weekend when he pulled a master stunt that sneaked him right back into the party’s top leadership, earning him 232 votes and defying the new directive that there should be no more floor nominations.
Leaving the outgoing executive committee with an egg on the face Kwelagobe, who holds no ministerial portfolio made it into the additional team of the BDP Central Committee, alongside five other candidates with ministerial positions namely, Minister of Transport and Communication Nonofho Molefhi (460 votes), Minister of Local Government Botlogile Tshireletso (355 votes), Minister of Education Unity Dow (323 votes) and Assistant Minister of Agriculture Fidelis Molao (250 votes).

Not only did Kwelagobe hold no ministerial position, he held no other position within the party and, furthermore, his constituency had not delegated him to stand in for the central committee elections when going to Mmadinare, Shima Monageng was the official delegate from Molepolole South. This is the third time in a row that Kwelagobe thumped Monageng for political positions.

Having served as the BDP’s Secretary General from 1980 to 2007 (27years) and the man who has served the longest in the Botswana National Assembly, Daniel Kwelagobe is a veteran of Botswana politics.

Many still recall him leading one of the two strongest factions to ever exist in the ruling party, a situation that nearly crippled the party. Of recent, DK as his supporters and sympathizers affectionately know him, has been followed by a dark cloud where he experienced a series of losses with the hardest being the Molepolole South parliamentary seat.

His losses came as a shocker to many for a political bulldozer of his caliber but as reality hit, Tlamelo Mmatli of the UDC emerged victorious. The fall of Kwelagobe was never anticipated at the BDP, but with the squabbles and tensions within the party itself some blamed it on sabotage from the current regime, which never loved him. He openly declared since then that, he was still fully a politician and will never be irrelevant.

He has once again come up to prove that with his experience, some of the things done within the BDP can be challenged and won in good standing. When all left for the BDP national congress, all the candidates running for positions within the central committee were known, and no one expected any new face to pop out of nowhere because they all had to write letters declaring their interests within the stipulated timeline, DK came out to overthrow and invalidate this.

When defending their decision to have candidates write letters, the now former Secretary General (SG), Mpho Balopi, explained that there is guideline which explains that for one to be up for nominations, he/she should be a member of the BDP in good standing which he says needs background check on the individual. He cited the Jerry Chitube incident where they nearly had someone who, he said, was not only an illegal immigrant but also an alleged “criminal” almost clinched a top seat of the national youth executive committee. He says these guidelines are set to safe guard the dignity and unity of the party.
However, things did take a different twist just before the elections started on Saturday when Kwelagobe indicated and communicated with his fellow democrats that should they wish for him to represent them he is available despite him not having written any letter to the relevant people within the stipulated timelines before the commencement of the congress.

“Should the BDP’s be interested to have me in their central committee, I am available to be nominated from the floor and no one will deny me that opportunity because I understand the constitution of the BDP very well,” Kwelagobe posited.

“I just want to be a back bencher not anything much, so I am up for the position of additional member in the central committee of the BDP; there is already an overwhelming wave from the members to have an elder in the new Central Committee to advise them accordingly,” he explained.

Kwelagobe further revealed that, the issue of him not having written any letter to the executive committee declaring his interests to stand does not, in any way, qualify to deny him the chance to stand because it is unconstitutional and will never be used against him.

He also indicated that he has known his interests for a very long time and did not write the letter deliberately because he knew of a constitutional process to do it, where his name is nominated from the floor and the members asked to second or support that.

When contacted for comment the now former Secretary General, Balopi, who now qualifies as the third longest serving SG in the BDP, revealed that it was disappointing for the party to get that from people of Kwelagobe’s caliber.

“You know we have rather allowed ourselves within the BDP to have shocking people but it is fine because this is politics,” he decried.
“For Kwelagobe to say that is not good for the party. As a party we are trying to depart from radicalism to ‘logicalism’ and we expect elders to assist in stabilizing things within the party and not to destabilize it. In view, some people could have done much better than what they have done and still continue to do,” Balopi ridiculed Kwelagobe’s efforts.

He advanced a position that Kwelagobe should accept the fact that BDP members have rejected him in many occasions and to save himself further embarrassment, he advised that he just lets go.

Despite these insinuations, Kwelagobe threw in his cards and went on to garner 232 votes making it into the party’s additional member list of the executive committee.

In the gist of this, political analyst, Anthony Morima, posited that the return of Kwelagobe could be insinuations from some that the BDP faces the necessity of keeping old guards within the party because of the institutional wisdom they possess and also could have been motivated by his support for Tebelelo Seretse who lost the chairpersonship race to Vice President Mokgweetsi Masisi.

“The strategy could have been that if Seretse loses then her camp could remain with a representative in the central committee between DK and Botsalo Ntuane,” Morima added. Botsalo Ntuane clinched the Secretary General position of the BDP.

Walia refuses to recuse himself in murder trial 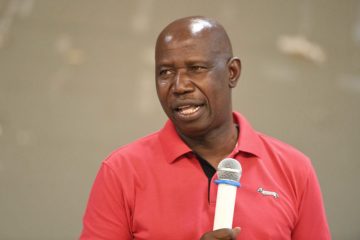