The Botswana Democratic Party (BDP)’s big win in the Letlhakeng West bye-election early this year has left a sour taste in the mouth of residents of the small and seemingly insignificant village of Metsibotlhoko who feel that their participation in the electoral process has brought them nothing but empty promises.  The residents vow not to register for the 2014 general elections if the ruling BDP fails to provide them with what they promised leading to the Letlhakeng West by-election in June.
The bye-election was won by BDP’s Ngaka Ngaka with 3, 437 votes to Botswana National Fronts (BNF)’s Filbert Nagafela who got 3, 097 votes, with Ngaka filling the vacancy created by the  death of the area MP, Maxwell Motowane late last year.

According to the village chief Kgosi Bafentse Moatsheng, the residents told the Independent Electoral Commission ( IEC)  in a kgotla meeting held by the latter at Metsibotlhoko last Wednesday that they were concerned about a number of issues and are tired of the ruling party’s empty promises.
“These issues were discussed in this very same kgotla. There was a promise that the constituents would benefit from government programs but not even a single person in this village has been assisted. Even the poverty eradication program has never reached this village. These are angry people, I am even afraid to approach them because they have a feeling that when I encourage them to register I don’t know what they are going through,” said Moatsheng.

One resident, Mpokana Kefentse said she cannot find a  reason to, “waste my time to register to vote if my vote will not help me in any way. I will not vote and I swear I will not be tricked twice. They were here a few months back saying that our lives will change if we vote for them. We were told that government officers will link us with government and that has never happened. They have long gone and  now they are asking us again to register and vote? For what? I am not going to vote. They cannot even provide us with electricity.  They are really undermining us, it is time we act,” she said.
The despondence felt in this small village maybe an indication of possible nationwide voter  apathy that is reflected in the dismal number of registered voters to date . It is almost three weeks since the Independent Electoral Commission (IEC) opened registration for next year’s general elections. According to the statistics from the Commission, less than 15 per cent of the targeted 1.4 million people registered in the first two weeks of registration, and registration process closes on Sunday the 27th.

The IEC faces a big challenge in their effort to reach their target and there the ever looming threat of voter apathy hanging over its head. The issue is not a new one as it was so pronounced during the 1999 election, a voter apathy study conducted  by the IEC in conjunction with the University of Botswana (UB) Democracy Research Project whose recommendations helped bolster the numbers in the subsequent elections of 2004 and 2009 with the latter posting the highest number of voters in country’s history.

In the run up to 2014, it appears the IEC has run out of steam and without an aggressive campaign to get Batswana to vote, the chances of a repeat of 1999 are a distinct possibility.
With the youth making up the majority of the population, engaging this important demographic will be an uphill battle as is voiced by the youth league representatives of some of the major political parties.  “I doubt that the IEC will reach its target. Low numbers means protest against politicians who can’t be trusted. Defections are one of the major reasons why politicians can’t be trusted anymore. It is also a protest, especially amongst the youth, against the authority. There is a high rate of unemployment, shortage of land and poor education. The youths tend to think voting is not important because the people they vote to power do not address their concerns,” said Botswana Movement for Democracy activist, Phenyo Segokgo.

Publicity secretary of the Botswana National Front Youth League Malatsi Mokhubame said Batswana do not take politicians seriously. “This is because at times politicians are not careful with statements they utter. They forget to pass the right message to the electorates and they only focus on embarrassing one another. At the end of the day voting loses meaning to the electorates,” he said.
Political analyst and UB academic, Leonard Sesa said Batswana are failing to realise that not registering will backfire on them in the end. He said their vote can bring change to the current situation but if they are reluctant to vote, nothing will ever change.

Despite the low numbers nationally, the recently released statistics have show some area showing robust registration numbers. The Sefhare/Ramokgonami constituency currently leads the country with 61 81 registered voters. This is in large part due to the highly contested battle between Dorcus Makgatho-Malesu and Oreeditse Molebatsi. According to Sesa, “ Malesu knows that for her to come back she must do a lot of work, hence encouraging her followers  to register to vote. She knows that there will be no life after the primaries if she does not succeed.  Truly speaking she has long been campaigning. At the same time the area MP wants to retain his constituency. He will do whatever it takes to retain it hence playing an important role in encouraging people to vote,” he said.

Sesa suggests that the reasons why other areas like Gaborone are experiencing low voter turnout could be because Gaborone residents usually vote for the candidate and not the party.  For now all the political parties do not have representative since they are still awaiting primary elections. “I hope in the next round of registration that is when they will register to vote with high numbers because they will know who is representing them,” Sesa added.
This however does not explain the worrying numbers in a constituency  like Gaborone Bonnington South  only registering 1508 registered voters, despite being one of the constituencies which might be hotly contested by the likes of  Ndaba Gaolatlhe for Umbrella for Democratic Change, Botsalo Ntuane for BDP and Friday Leburu for Botswana Congress Party.
IEC is still confident that people will turn up in high numbers during the last days. “It has always been the case in previous elections. People tend to wait for the very last days. We are hopeful that we will reach our target. We can only worry if people do not turnout on the last days,” said Osupile Maroba of the IEC.

According to UB Political Science Professor Zibani Maundeni, “It will not be wise to commit ourselves and say there is voter apathy while the registration process is ongoing. People might be reluctant to register now but they might turn up with huge numbers during the last days. It is important to have the total number of people who registered at the end of the registration That is when we can conclude to say whether there is voter apathy or not.”

This sentiment is echoed by fellow analyst Lawrence Ookeditse who said, “What we know right now is that the registration process is slow. What we do not know is whether people will turn up with huge numbers to vote on the last days or not. We must understand that there are supplements. We may see a scenario where numbers improve throughout the year”.

Let’s Force Our Leaders to Account Even If They Hate It! 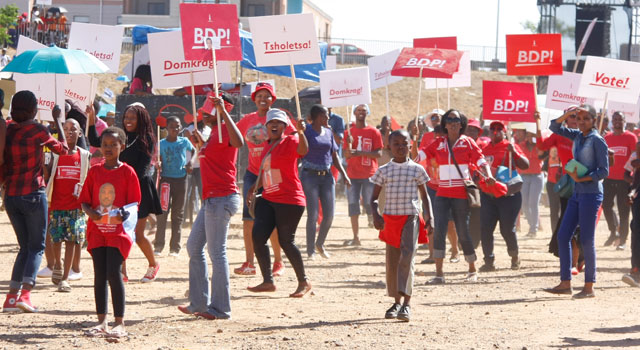