Local fashion icon and blogger Tsholo Dikobe has been named   as one of the Top 5 rising stars in   Africa by the latest issue  (February 2014) of the colourful lifestyle magazine, New African Woman.  She was ranked amongst international star Lupita Nyong’o of the movie 12 Years a slave.

“I am honored to be profiled and featured in this esteemed magazine as one of the world’s  and African top 5 ‘rising stars’ alongside other prolific figures in the world of film directing, movies, business and the fashion industry. It means my work is recognized as far as the UK hence the need to highlight this in their esteemed magazine, New African Woman,” said the Gatsh Fro’s other half.
The magazine is dedicated to providing an in-depth and huge emphasis on inspirational Africans . It offers meaningful, inspirational features that celebrate and embrace the African woman’s diverse accomplishments and aspirations in all spheres. It mainly celebrates black culture and beauty with a unique indigenous twist. The role models including celebrities and musicians featured in New African Woman magazine are strong independent and inspirational black women who are also proud of their heritage. It covers the whole entire African continent and it’s Diaspora.

Commenting on how the feature came about Dikobe said, “The editor of the magazine, Regina Jane Jere-Malanda, a London based journalist and editor of the New African Woman magazine met me at the 2013 Africa Mercedes-Benz Fashion week. She loved my poise and thought I was a discerning woman of substance and that I represented what the new African woman is all about. After we exchanged contacts, she sent me an email and told me that she and her daughter had been following me, my fashion work about Botswana, my community even before we met at the fashion week. Thus, she thought I would be perfect for the UK ‘rising stars’ edition of the February issue looking at what I have accomplished thus far in a short span.”

According to Dikobe, she was labeled a rising star because of her work ethic and dedication to branding Botswana; where now her focus is in favour of designs by local talent. “I use my own voice to advocate for creativity and confidence building through this medium of communication called fashion, which is accessible to almost everyone. I stand out because I give fashion a new meaning, a deeper connotation than it being just about looks. I sensitize and seek to empower my community about everything there is to know about their history, habitant, culture, future and art of their lives through fashion. It is for this reason that I was also elected and invited with 11 other fashion multipliers from different parts of Africa to go for the Berlin Mercedes-Benz fashion week in June-July 2013. I am more than proud to continue providing the country with this platform that encourages a more proactive role in the creative/arts industry,” she told Time Out. 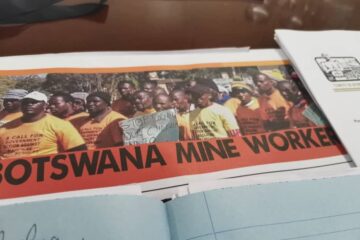