Sayeed Jamali’s company, Universal Builders, is the biggest beneficiary of the accommodation tender from the Botswana Defense Force (BDF) among private suppliers in the current situation where government is failing to provide adequate accommodation for soldiers.

It emerged recently in parliament that out of five companies including Botswana Housing Corporation (BHC), Universal Builders makes P4. 4 million from its contract with the BDF, providing 145 rented units on a three-year contract.

This was revealed by Defense Minister, Shaw Kgathi after a question from Gaborone-Bonington North MP, Haskins Nkaigwa, who had wanted to know the state of accommodation for soldiers.

According to the minister, the parastatal, BHC, makes the biggest profit for its 441 units which earns it P11.4 million. After Universal Builders follows Albertina Companies which offers 60 units for P2.6 million. A company named “Mr. K. Ketshogileng” apparently makes P766 600.00 for 18 units while Avornberg offers the same number of units for P734 400.00.

Kgathi also told parliament that when procuring accommodation for soldiers, the Public Procurement and Asset Disposal(PPADB) is involved. “Floating an Expression of Interest for individuals and companies to show interest to provide BDF with accommodation, the houses are divided into three catagories: high cost, medium cost, multi-residential and high density. Compliance stage and those that have passed this stage, proceed to the technical stage. Once they have passed the technical stage, they are then registered into the database and invited for financial bidding. Those who pass the financial stage then enter into a three (3) year lease agreement with the BDF,” he explained.

Kgathi also revealed that 40.3% of military personnel share accommodation while none are accommodated in tents on permanent basis. He however said 7.7% of military personnel were housed in offices, halls and working areas which are not suitable for accommodation. This prompted Francistown South MP, Wynter Mmolotsi, to ask the minister if he does not think housing for soldiers should be prioritized ahead arms acquisition the purchase of arms and ammunitions, a point the opposition has been hammering throughout the NDP 11 debate.

The minister said out of the total budget passed recently, his ministry was going to spend slightly over P2 billion on housing and infrastructure. “So, you can calculate the percentage, about P2 billion over the P14.7 billion. Simple arithmetic, I do not have a calculator here,” he told Nkaigwa after a following up question. 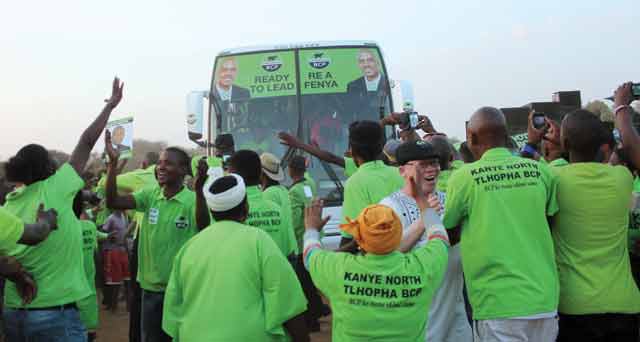