Monday morning was not a police drill, neither was it an ordinary class session at Botswana College of Agriculture (BCA). The Gaborone West Police Station riot squad received orders to suit up and get armed to disperse disgruntled students who were breaking windows, chanting protest songs, flaunting nasty placards, burning tyres, and blocking management and employees from entering the school premises.

The students’ bone of contention was management’s failure to address their grievances and demands. The action resulted in the Acting Principal, Dr Mataba Tapela closing the school indefinitely.

The Student Representative Council (SRC) President, Mbiganyi Taka told this publication that they protested against the refectory which served them unpalatable food. “We demand a wider choice of where to get food or a different company to be engaged to provide food services,” he said.
Other grievances, according to Taka, included appalling sanitary conditions, lack of wireless internet and some students allegedly sleeping on the floor due to a shortage of beds. He lamented that the dreadful situation is hazardous to their health. Taka further criticized the school for poor management which he said was not capable of leading the school’s transformation into a university. He said management excluded critical stakeholders such as student welfare, library and academics for a benchmarking exercise to Canada.

The Botswana Gazette team took a tour to inspect the school and were dismayed to find the ablutions in horrific condition and some of the hostels in total chaos. Sixty students shared six showers which not only was a health risk, but caused long queues in the morning when students showered for class. During the tour, the team noticed falling ceilings, broken beds, and unsanitary baths which the students said were not maintained for a long time despite their repeated appeals.

Shocked by the lackadaisical approach of the college administration, The Botswana Gazette team called the Ministry of Education and Skills Development to find out if they were aware of the dilapidated state of the college, but they were not available for comment. Speaking to this publication on condition of anonymity for fear of victimisation, some of the students said they were prompted to boycott classes because the administration had adamantly refused to respond to their problems.

The college’s assistant Public Relations Officer, Nonofo Makabe confirmed last week that the students had been boycotting classes and that the SRC wrote management a letter detailing the students concerns. Makabe said they were negotiating with the SRC and Department of Tertiary Education Financing (DTEF) regarding the student’s demands. DTEF was invited to the discussion as the financing body to assist with a solution of whether to dispense cash allowances to the students or contract a different catering company.

On issues regarding maintenance, Makabe said they are currently working to maintain the school and rubbished claims that some students were sleeping on the floor.

In his statement before closing the college, Acting Principal, Dr Mataba Tapela said the school will be closed until further notice and declined to respond to any of this publication’s questions regarding the students boycott or their concerns. 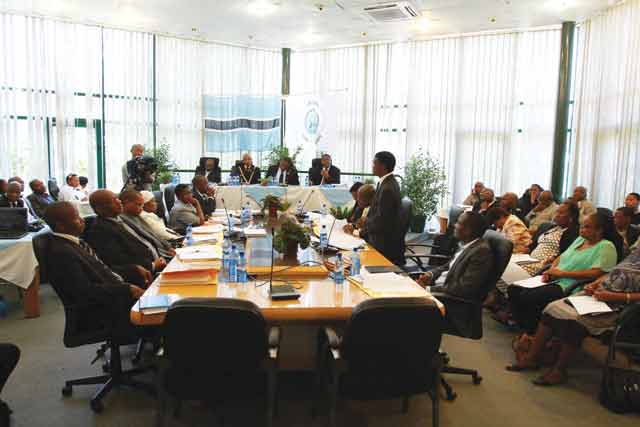